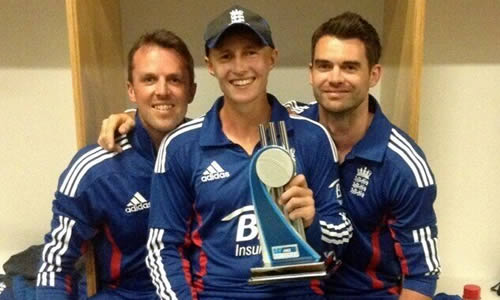 Alastair Cook lauded the “character” of his England side after they cruised to a five-wicket victory in Auckland, completing an emphatic comeback in the three-match one-day international series.

England reached their target of 186 with five wickets in hand, after Steven Finn took 3-27 despite a valiant 80 from Brendon McCullum.

Knocks of 46 from captain Cook, 39 from Eoin Morgan and 38 from Jonathan Trott saw England home with 12.3 overs to spare, as they secured their first ODI series victory over New Zealand in 19 years.

The England captain was left to reflect on another supreme bowling performance, which had reduced the Kiwis to 11 for three by the eighth over.

“Those last two games, the character we showed – it must win games for us and can only bode well for us in the future,” said the 28-year-old.

“We were a little bit rusty in the first game, but the way we went about things putting it right we can really take from. We were excellent up front. The bowlers really set the tone and 180 on that wicket should never be enough.”

“When McCullum gets going it’s a little bit frustrating, but 180 wasn’t enough and we handled the pressure of chasing pretty well.”

“We probably lost a couple too many wickets if we’re being harsh, but it was pretty comfortable.”

On the new-ball duo, Cook added: “They have been magnificent, these two games. Finny’s pace, I think he’s up around the 90mph mark pretty much all the time, and Jimmy’s world class and he showed it again here.”

“It’s quite easy to captain in the first few overs when you’ve got that sort of control. We’re going to have to do it again in the Test series because they’re very dangerous players, these New Zealanders, and if we’re off our game they’re going to punish us.”

Having earlier won the T20 series, England head into next month’s three-match Test series as overwhelming favourites, but Cook is adamant that their approach will not be defined by what has come before.

“There’s absolutely no complacency,” he said. “You know how hard Andy Flower works. He’ll be desperate to get his teeth back into coaching us – I’m not sure what he’s been doing for the last month or so!”

The first Test begins on 6 March in Dunedin.