Nikolay Davydenko is among the players to book a spot in round two, after the Russian defeats Janko Tipsarevic in straight sets 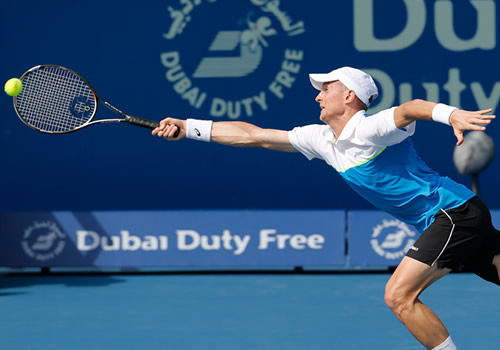 The second day at the Dubai Duty Free Tennis Championships was like a fine box of chocolates: The selection of matches catered for every taste and the most demanding of palates.

Five of the top six seeds, five of the top 10 men in the world, opened their campaigns in one showy day, and such was the schedule that one of them, the No3 seed Tomas Berdych, was forced to the outer reaches of Court 1. Here, the seats were free and they were packed at the prospect of such a fine programme, but there was early disappointment for the hardy souls sitting in the full sun.

The 20-year-old Bernard Tomic, playing the 31-year-old Victor Hanescu, retired sick after just 22 minutes, having been broken in the opening game. Fortunately for the fans, Berdych, fresh from a final finish at the weekend in Marseille, turned on the form to win for the loss of just four games.

Meanwhile, in the opener on Centre Court, it was hard to figure whether something was ailing the No6 seed, Janko Tipsarevic—or perhaps it was just the opening half hour in the heat of high afternoon for the first two games, that drained him.

Tipsarvic was one of the four seeds playing in Dubai who had already won a title in 2013—in the tour’s opening week in Chennai. But things had gone off the boil since he retired in the fourth round of the Australian Open. He lost in the opening matches of both subsequent tournaments, in Montpellier and Marseille, and was then having to make the transition from indoor to outdoor conditions.

He was also facing a man who carried some formidable form in his past, the former world No3, Nikolay Davydenko. They had split the previous four meetings with Tipsarevic winning the last two in 2011—but both those were indoors.

Davydenko also began the season well reaching his 28th career final in Doha, where conditions are not dissimilar to Dubai: indeed he had won the title there in the past, too.

Certainly when he’s hot, he’s still a feared player, despite his slide to the 40s in the rankings: Ask Roger Federer who nearly lost to him in Rotterdam last year. And after a 13-minute hold in the opening game, he eventually broke Tipsarevic. They had seven break point chances apiece, but it was the Russian who converted the vital one and it opened the floodgates, three straight breaks and the opening set, 6-0.

Tipsarevic forced a comeback in the second, drawing cheers with his first game and even more when he twice broke for a 4-1 lead. Those who have seen Davydenko so often take an early lead only to lose probably feared just that, but Tipsarevic began to struggle on serve and Davydenko twice broke back as the Serb berated the net. And the match quickly ran away as the Russian won four straight games to win, 7-5, and the chance of Federer in the quarters further into the week—though No34 Marcel Granollers is his next hurdle.

He is one of the quirkiest characters on the tour, under the radar, brilliant or dreadful, witty and self-deprecating. And all those things came through afterwards:

“I am really too old to be thinking about my level. Just really I would like to get some level and say I’m now in the top 20…but if I play those [top] guys and lose, then I lose confidence…one day I play good, next day I come and play like a 300-year-old, I just don’t know.”

But perhaps he enjoys being under he radar these days: “Too much stress being in the top 10. You need always to be defending, you have a little bit more pressure, like always press pushing you. Me not anymore I have no pressure form you!”

So a lost seed on one court, a fallen ‘rising star’ on another, and the chance—just—of another upset as No4 seed Juan Martin del Potro took to court with the popular Marcos Baghdatis.

The Cypriot seems always to have bad luck in Dubai. On his debut here in 2007, he drew Rafael Nadal in the opening round, on his return in 2010, it was Gilles Simon and last year it was Jo-Wilfried Tsonga. This time, he had a Del Potro fresh from victory in Rotterdam, but the charm of Baghdatis is his attitude:

Perhaps he was drawing on his success in their last two matches, both wins, both on similarly hot courts in Australia—and he came to Dubai playing well: a semi finish in Brisbane and some great matches in Rotterdam.

He also started this match well, losing just two points on his first serve and earning and converting the only break point of the set—and that at 5-4 up. It could not have been timed better.

The second set was a reverse, as Del Potro seemed to shake off the indoor season and adjust his forehand and serving. He dropped just four points on serve and then converted the only break point of the set, in the fifth game—helped by a succession of errors from Baghdatis. It was another 6-4 set and they were all square—but the momentum seemed to be with Del Potro, especially when he faced a break point in the third game of the decider.

But Baghdatis survived and went on the offensive in the next. A superb drop volley and lob finish brought up break point, which he took with a roar, and held to lead 4-1. But Del Potro was not done. He broke back and levelled at 4-4, but a sequence of uncharacteristic forehand errors gave Baghdatis two break and match points. Del Potro saved them—with forehand winners—then conceded another break point—with a forehand error. But he held off the challenge, and the packed stadium cheered their support. It could only be decided by a tie-breaker, and that was Del Potro’s—just—all the way.

Appropriately, they were separated by only one point in the set—another very fine performance from Baghdatis that was acknowledged by Del Potro afterwards: “He’s a great player.

“He fights like me every point and we made fantastic rallies…He plays very flat and he’s fast on the baseline. He has a very good backhand down the line, and he played well.”

Del Potro goes on to meet Somdev Devvarman and, admitting tiredness and “some little pains in my wrist”, he will hope for less than two and half hours on court.