Oscar Pistorius: Management company says that Olympian disputes the murder charge brought against him "in the strongest terms" 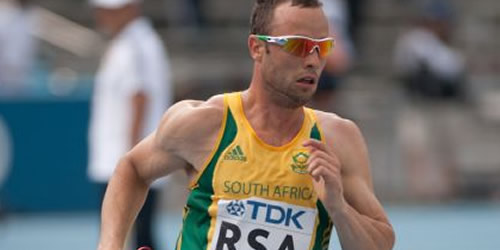 Oscar Pistorius’s management company says that the Olympian disputes the murder charge brought against him “in the strongest terms” following the death of his girlfriend.

Reeva Steenkamp was shot dead at Pistorius’s home near Pretoria, South Africa on Thursday morning and the Paralympian has since been formally charged with “premeditated murder”.

The statement read: “Firstly, and most importantly, all our thoughts today must be with the family and friends of Reeva Steenkamp.

“Oscar Pistorius has appeared in court here in Pretoria this morning formally charged with the murder of Reeva Steenkamp. The alleged murder is disputed in the strongest terms.

“These are now live and active legal proceedings which must be allowed to take their course through the process of proper investigation by the police, evidence-gathering and through the local South African judicial system.

“In a short hearing lawyers representing the athlete asked for a postponement for a bail application until Tuesday next week to allow time for their own investigation into the circumstances of the tragedy, which was agreed by the Magistrate, who also agreed that Pistorius would be held in custody at a local police station.

“Oscar Pistorius has made history as an Olympic and Paralympic sportsman and has been an inspiration to others the world over.

“He has made it very clear that he would like to send his deepest sympathies to the family of Reeva. He would also like to express his thanks through us today for all the messages of support he has received – but as stated our thoughts and prayers today should be for Reeva and her family – regardless of the circumstances of this terrible, terrible tragedy.

“We will endeavour to issue other statements as matters develop but in these circumstances I am sure you appreciate it is very difficult to answer any more specific questions. Thank you very much for your attention.”

An application for bail was postponed until next Tuesday and Pistorius, 26, will remain in police custody.

Six Nations 2013: Wales’ Biggar insists the best is yet to come