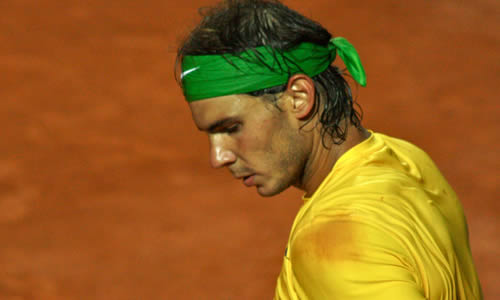 Rafael Nadal admits that his troublesome knee is “still bothering” the former world No1 as he continues his comeback in South America.

The Spaniard, who missed the second half of the 2012 season due to tendinitis in his left knee, was beaten by world No73 Horacio Zeballos in the final of the Vina del Mar tournament in Chile earlier this month.

The 26-year-old then claimed his first title of the year after a straight-sets victory over David Nalbandian in the Brazil Open final last weekend.

Nadal’s next tournament is the Mexican Open, which gets under way on Monday, but the French Open champion concedes that he has still not fully shaken off his knee injury.

“The knee isn’t 100 per cent. It’s better and I’ve been able to compete, but it’s still bothering me,” Nadal told ESPN.

“It’s better on some days and worse on others, which isn’t ideal for someone like me, because my idea of competing is based on giving it all at all times.”

The Spaniard went on to admit his frustration at the delays to his return to action.

“I always said ‘I have to go back’, but for various reasons it wasn’t to be”, Nadal added.

“Now things have come together to make it possible. It’s on clay, which helps, and in any case it’s long overdue.

“I was excited about playing in the South American swing again and I’m sure it’ll be a fantastic experience.

“I don’t know about results, but emotionally it will be great to play in front of people who speak my language, people who are like brothers, in front of a crowd where I feel very at home.”