The London Warriors are an American Football team who point to humble roots, writes Chris Bailey 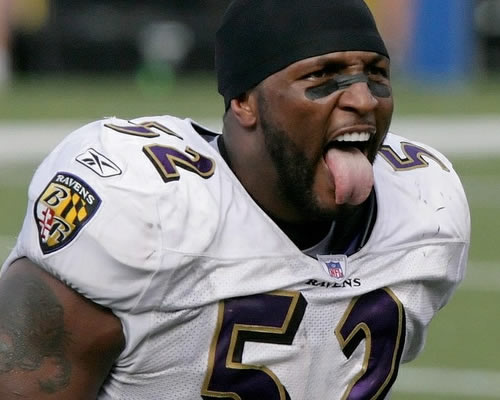 Lined up against the glitz and glamour of the recent Super Bowl, the London Warriors are an American Football team who point to far humbler roots.

There are no wages. No press coverage. And certainly no cheerleaders. For as much as the National Football League and its players preach about the love of the game, the passion is no purer than in Croydon.

Perhaps football in this country, stripped of its gold paint, is what attracted Baltimore Ravens legend Ray Lewis into spreading his wisdom across the Atlantic.

Last July, the now-retired linebacker joined the Warriors for a three-day training camp in preparation for a showdown with arch-rivals London Blitz.

Wishful thinking from junior head coach Gerry Anderson turned into reality as right before his side’s eyes, Lewis gave the same kind of Churchillian battle-cry as he has to his team-mates countless times in Baltimore’s purple.

“We sent him an email, told him about the programme and that was literally it,” said Anderson.

“There was no big fuss from his side, he wanted to come and help – it was the right time and right place.

“For a lot of the kids it was the realisation that, as one of their heroes, here is someone they can look up to and realise that he isn’t all that different to them.

“Some of the things that Ray went through, they are going through yet he still made it. That gives them the opportunity to be more positive about what they can achieve.

“The reality is though it is mentally tough to make the commitment Ray has made.”

The Warriors won of course. But as the trail of smoke Lewis left in his wake gradually subsides, Anderson admits it can be difficult to leave their own indelible stamp on the local community.

“We don’t get as much support we’d like to but a part of problem is where we are based – we’re in Croydon but we play our games in west London,” he added.

“So it can be hard getting our community involved but we’re making progress in trying to change that. To us, getting local people down is what it’s all about.

“More and more youngsters are getting involved – our youth team was as big as it’s been since it existed last year and a lot of them were sourced locally from other sports.

“Those who are dedicated and have ability, can hopefully move to a better situation playing elsewhere at a higher level, whatever that level may be.”

The Warriors are part of the British American Football Association, finally a constant among a large list of nebulous governing bodies who have presided over the sport’s fortunes.

Anderson is one who can attest to the negligence of past overseers. As a former tight and defensive end in both the British game and NFL Europe, he has played through several cycles of boom and bust.

But British interest is on the verge of snowballing again. Wembley Stadium has hosted NFL games since 2007 and the league’s commissioner, Roger Goodell, recently expressed tentative interest in creating a bonafide UK franchise.

And if it were to happen, Anderson – once the NFL’s UK development officer – believes it would lead to a sustainable future for grass-roots football far-removed from the empty promises of decades gone.

“It would help the development of the sport because it would give the youngsters something to aim for – something they can reach for and almost touch,” insisted the ex-London Monarch.

“Back in the 80s you had about 300 senior teams with 50 to 60 players each, and there was a lot of money involved in the sport in terms of sponsorship.

“But that all fell down due to lack of development. I think the people running the sport at the time didn’t think about five, ten years down the road – it was all about the now.

“There were no plans in place for how the sport was going to grow in this country, especially getting kids involved.”

It may be a while yet before we witness a Briton, born and raised, make a mark on the NFL. But Anderson realises – much like Lewis – if you invest your faith in others, they have faith to succeed for you.