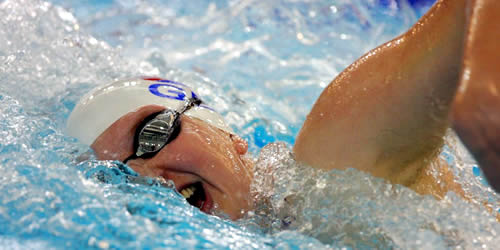 Rebecca Adlington has announced her retirement from swimming at the age of 23.

The two-time Olympic gold medallist has chosen not to defend her titles in Glasgow next year, and will now focus on her campaigning work.

She said: “I hate the word retire. I love swimming but as a competitive element and elite athlete I won’t compete any more.

“I’ll always be swimming even when I am 90 years old.”

She added: “I have achieved everything I wanted to. Some people want to milk it all they can. I’ve always said I wanted to finish on a high, despite my love of the sport.”

He said: “Becky Adlington’s unforgettable success in Beijing inspired a generation to get in the pool and swim. Her down to earth personality and remarkable career achievements have made her a national treasure.

“Becky’s vision for the future of grass roots swimming in this country will create a wonderful legacy from one of our greatest Olympians.

“I have no doubt this vision will be pursued with the same drive, dedication and determination as Becky consistently displayed in the pool.”

Adlington became Britain’s first female Olympic swimming champion in 48 years with victory in the 400m freestyle at the 2008 Beijing Olympics.

The Mansfield-born swimmer then added a second gold by winning the 800m freestyle final in a world record time of 8:14.10.