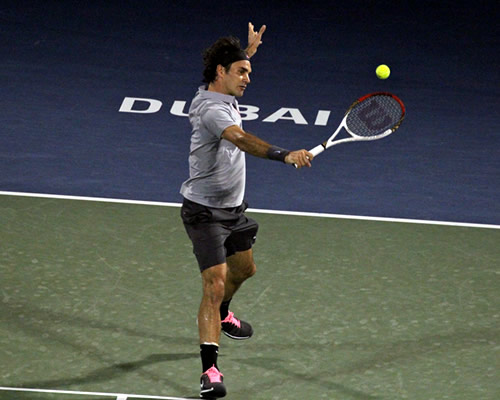 Roger Federer will take on Tomas Berdych in the semi-finals Photo: Marianne Bevis

It took minutes rather than hours for the third and fourth seeds Tomas Berdych and Juan Martin del Potro to race through their daytime quarter-finals into the semis of the Dubai Duty Free Tennis Championships.

In Del Potro’s case, it took just 61 of them, in a surprisingly straightforward 6-4, 6-2 win against the towering Daniel Brands. The German qualifier had taken the Argentine to three tie-breaks via 32 aces last autumn in Vienna, but he could not withstand a Del Potro who is finding better form with each round on these fast courts—and that’s with a sore wrist that he insists is preventing him from playing his best.

In Berdych’s case, it took only 63 minutes to dismiss wild card Dmitry Tursunov, 6-3, 6-2—though this one was perhaps less of a surprise: The Czech beat Tursunov 6-2, 6-1 in Marseille last week. And that’s what made the Berdych performance particularly impressive—it came on the back of an indoor final just last Sunday.

The two big men then had to wait out the evening session to confirm what most expected: Two cracking semi-finals that would place Del Potro against top seed Novak Djokovic and Berdych against Roger Federer.

The top two were certainly favourites to advance. Djokovic faced the only other seed left in the draw, Andreas Seppi, a man who, at 29, has been playing the best tennis of his career to take him to his highest ranking. He would be no push-over—though Djokovic had beaten him in all eight previous meetings.

The second match was a revisiting of an old rivalry already 20 matches long, and one that is always intriguing. As Federer pointed out in his press conference about his 18-2 record against former world No3, Nikolay Davydenko: “I know what he can do on his absolute best day because I was one of the guys that got crushed by him during that time. I expect him to come out and play that way.”

Davydenko was less confident, referring to his age—at 31, the same as Federer—and to his trouble with concentration. Nevertheless, he reached the final in the similar conditions of Doha earlier this year. He was, though, looking forward to the cooler evening conditions in order to impose his own baseline game, and he got his wish—an 8.30pm start that saw Federer wearing an extra undershirt.

First, though, came Djokovic, who was really pushed in the opening game, fighting off a break point before holding serve. It suggested a good battle, but the Serb soon disabused the crowd and his opponent with swift retribution.

The second set saw a little more resistance from the Italian. For a start, he fought off a break point on his opening serve to score his first game, much to the delight of a crowd roaring him on to greater efforts.

But it was not lack of effort on Seppi’s part that was the problem. It was the clinical precision of Djokovic, firing on both wings to within inches of the baseline corners until his moment came for a full-blooded swipe away for a winner. It was inevitable, then, that he broke through in the fourth to lead 3-1,

Seppi fought off another break point in the eighth game with a forehand winner worthy of the Serb but he never looked like closing the gap. A ruthless Djokovic retrieved everything, dropped just three points on his first serve and finished with a flourish at the net, 6-3.

Here was the No1 man showing why he is just that. He hit the ball cleanly, consistently and to a length, stepped inside the baseline to return serve with real intent, and was deft at the net. He was still not 100 percent satisfied, but close to it:

“Again I didn’t use my first match point. I’ve got to start thinking about using the first opportunity. But it was an even better performance than the first two matches, so I’m elevating my level, which is good.”

His victory, though, was the longest so far, a generous 64 minutes. Federer would demonstrate how to trim 10 minutes off that.

One could not but feel sympathy for Davydenko as they warmed up. The announcements came thick and fast in Federer’s favour, and it was daunting by any measure, let alone for a man so often beaten the man he first played 11 years ago.

Federer almost broke in the opening game, too, but failed to convert two chances. After a love hold, though, he made no mistake in the next game, breaking at the second attempt and holding to lead 3-1. He did it again in fifth and a love hold took it to 5-1.

Davydenko steadied the ship—indeed he was not playing badly, striking the ball flat and fast across the angles, as is his wont. He took on the attack against the Federer serve to reach deuce, but Federer was pulling the strings most of the time, and held for a 6-2 set in 29 minutes.

Now the race was on against the clock. The previous three quarter-finals had taken just over the hour…would Federer match them?

Each change of ends was turning into a fiesta, with competing fans setting up Mexican waves to match the chants. Both men responded with some fine exchanges in glorious bullet-fast rallies from the baseline, forehand to forehand, angled and flat. Davydenko put up one superb winning lob and he ventured to the net, too, but the Federer backhand was in destructive form and a whisper of a sliced ball fell at the feet of Davydenko to bring the break.

As if that was not enough, the Federer forehand down the line began to break the Davydenko rhythm, and the Swiss broke again. The Russian, his head drooped, his mouth set, could do little, and a love service game from Federer brought the curtain down with a flourish, 6-2, in 53 minutes.

The Federer serve was especially productive—he dropped just one point on first serve in the second set—but as he acknowledged afterwards, Berdych is a different prospect. He did, after all, beat Federer in the quarters of the US Open:

“Berdych is obviously a good player, amazing power, one of the strongest guys out there on tour. He’s really established himself comfortably in the top eight, if not top six. I’ve struggled somewhat against him, just because his game is so big. He has a big say in the outcome of the match. I’ve had a couple of other ones where I’ve been able to come through, so we’ll see tomorrow how it goes.”

In Dubai’s quarter-final race, though, Federer ended as the top man by a full eight minutes.