Rotterdam 2013: Grigor Dimitrov and Jerzy Janowicz were among the young guns in action on the opening day 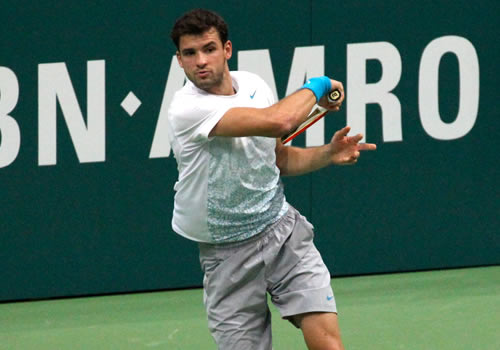 It’s a big year for the ABN AMRO World Tennis Tournament in Rotterdam.

The first ATP 500 in the tennis calendar is celebrating 40 years, a landmark that deserves the presence of the biggest name in tennis, Roger Federer here to defend his title. And for added appeal, the anniversary also features last year’s losing finalist, the ever-popular Juan Martin del Potro.

As the top two seeds, and No2 and 7 in the world respectively, they could go all the way to a repeat championship match, and that has become a particularly compelling prospect since they last met in Rotterdam.

Del Potro pushed Federer closer with every one of their eight meetings in 2012—their French Open and London Olympics matches could not have been tighter—and finally got the better of Federer back indoors at the end of the season, winning in Basel and at the World Tour Finals. In short, another final in the Netherlands would have a lot on the line.

The draw is enhanced further by two more top-10 players, Frenchman both. Jo-Wilfried Tsonga—a finalist in Rotterdam two years ago who found one of his purple patches in a five-setter against Federer at the Australian Open—is seeded No3. Richard Gasquet, already a winner of two titles this year—including indoors in Montpellier last week—is No4.

Completing the seeds are four players inside the top 30: world No14 Gilles Simon, No18 Andreas Seppi and No27 Florian Mayer. And sandwiched amongst them is a name that came to prominence with a vengeance at the only indoor Masters of the year, in Paris.

The rangy, powerful 22-year-old Jerzy Janowicz has threatened to break into the big time for a couple of years, and finally did so at the BNP Paribas Masters. He went through qualifiers and beat three top-20 and two top-10 players en route to his first ATP final. That topped a year in which he started at 221 and ended at 26, and it meant he was seeded No7 in Rotterdam.

Janowicz is one of a band of five players aged 20 to 22 who have taken their time to mature on the senior tour. The highest ranked of them, the 6ft 5in No13 Milos Raonic, is this week topping the bill in San Jose where he is aiming to win the title for the third straight time. But the other five men are all in Rotterdam.

The lowest ranked, 22-year-old David Goffin, is also the smallest—a touch under 6ft—but has a mobility and variety that has reaped wins on clay—he took a set from Federer in the fourth round of the French Open—and on hard courts. He won the indoor Challenger event in Orlean in the autumn and then reached the quarters in Valencia. He also happened to be the chosen partner in a near-two-hour practice session for Federer on Rotterdam’s opening day.

Meanwhile, though, the other three big, young guns promised some tantalizing main-draw tennis. First up was Janowicz against Victor Hanescu, but he also became the first loser of the tournament in a shock 7-6, 6-3 defeat.

Giving his younger opponent almost a decade in age and two inches in height—though Hanescu is a substantial 6ft 5in—the Romanian nevertheless resisted the onslaught of 10 aces and searing forehands. Hanescu broke twice, using some nice sliced backhand skills to counter those of the Pole, in what became a clear case of experience over youth.

Janowicz, distracted by noises on the practice court alongside, had the poorer concentration in the tie-break and could never regain the advantage. So while the Pole has the skill, physique and surprisingly good mobility of a future top-10 player, he has some maturing to do.

The same might also be said of the other two young men who sparkled like diamonds as juniors. Bernard Tomic, still only 20, won the junior Australian Open at 15 and then its equivalent at the US Open in 2009, while 21-year-old Grigor Dimitrov won the junior Wimbledon and US titles.

Their careers have run in parallel ever since: Pros since 2008, ranked just four places apart—Dimitrov at 41 and Tomic at 45—and both making waves at Wimbledon in 2011. Dimitrov took Tsonga to four pulsating sets before losing, while Tomic made it all the way through qualifying and on to a quarterfinal meeting with Novak Djokovic—and took the No2 seed to four sets, too.

Then by happy coincidence, both had breakthroughs in this year’s opening hard-court tournaments, with Dimitrov reaching his first final in Brisbane and Tomic winning his first title in Sydney. But despite all the parallels, they had never met—until the first round in Rotterdam.

As if to press home the similarities, they looked, to the novice eye, identical. Both sponsored by Nike, they opted for the same white shirts, grey shorts, white socks and bright yellow shoes. The also happen to be tall and slender with cropped dark hair. Fortunately for those not familiar with the distinctive single-handed backhand of Dimitrov, he also wore a sea-blue sweat-band: Tomic wore one in grey.

In play, there are similar strengths, too. They can unleash a decent serve, throw in a reasonable drop shot and take a ball overhead without too much trouble. But Dimitrov has a certain ‘extra’ about his game: flexibility on the backhand, disguise on his ground-strokes and some remarkable creativity around the net—on the all-too-rare occasions he finds himself there.

Not for nothing has he been compared with a young Federer, but he made it clear afterwards that he is working hard to evolve his own distinctive game. He has recently changed coaches and training bases—not for the first time—to join the Good to Great Tennis Academy in Sweden: “It was something that I needed to do in my career, in my development, to give me an extra edge and of course push me to another level.”

And his growing assurance took him to a quick first set against the more inconsistent Tomic, 6-3.

The Australian has shown signs of immaturity in the past—both on and off court—but against a man who could become a major rival in years to come, he regrouped impressively to break at the start of the second set and held his advantage to take it, 6-3.

It required just one break in the seventh game of the third to decide the match, another 6-3 set to Dimitrov, and as the personable Bulgarian admitted afterwards: “The difference was small. It came down to a few points here and there.”

It was a crisp hour and half that told much of the potential of both men but hinted at an extra step taken in the flowering of Dimitrov.

He was level-headed in his appreciation of this band of young men who are spearheading the next generation: “It’s happening for all of us—but all of us has his own way and I don’t think each of us has found the right combination yet. It’s going to take time, and one of the most important things is just to stay injury free. The rest is going to come with hard work.”

And he will need all that mature perspective when he takes on the experience of either Nikolay Davydenko or Florian Mayer in the next round.