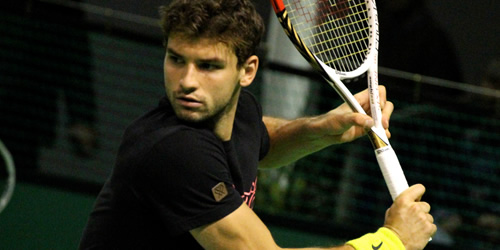 If age is a state of mind, then three of the eight men in the Rotterdam quarter-finals that got under way on Friday probably feel little different from the youngest of the final eight.

It fell to Grigor Dimitrov, the 21-year-old star from Bulgaria, to open the day’s singles action against Marcos Baghdatis—hardly a spring chicken at 27.

The Greek Cypriot, a former No8, had after all reached a Grand Slam final, in Australia, two years before Dimitrov lifted the Wimbledon junior trophy in 2008.

It was down to the next youngest player in the quarters, the 23-year-old Martin Klizan, to determine the last semi-final place at the end of a long day at the Ahoy Arena. He faced one of only three seeds left in the draw, Gilles Simon who, like Baghdatis, has been round the block a few times in his 28 years. He won his first title in 2007 and ended 2008 ranked No6 in the world—when Klizan was ranked a full 600 places lower having not played a single main draw match.

Of course, things had changed for both Baghdatis and Simon since their early success. They had yoyo-ed up and down the rankings, come back from injuries, won and lost to big names and become fathers—and they had seen the coming of a new generation. Dimitrov arrived in 2013 at a career high of 40 with his first ATP final under his belt, and Klizan, also lately a finalist for a first time, broke into the top 30 at the turn of the year.

Sandwiched between these bookends were two matches that boasted not one but three men well past the 30-year-old landmark: Roger Federer, Julien Benneteau and Jarkko Nieminen were all 31.

In the first, the man from Finland took on No2 seed Juan Martin del Potro and the odds did not look good. Del Potro had not dropped a set in their three previous matches, the Finn was the only quarter-finalist to play three sets in his previous match—and then there was the issue of del Potro’s record on indoor courts in the last 12 months: finalist in Rotterdam, winner in Marseille, Vienna and Basel, and a win of over Federer at the World Tour Finals.

The next match brought together Federer and Benneteau in a highly-anticipated battle, for the Swiss had lost to his contemporary in the 2009 Paris Masters and famously went two sets down in the third round of Wimbledon last year, survived a fourth set tiebreak and was helped to a win when Benneteau suffered a muscle pull in the final set. What’s more, while Federer rose back to No1 in July, the Frenchman was also enjoying something an Indian summer with a career-high ranking of 26.

And the way the draw was configured, the final could—theoretically at least—place two 31-year-olds against each other or the two youngsters.

It proved to be the youngest man who stole the limelight—though he was helped by a Baghdatis proving that he is not yet yesterday’s man. In their previous two completed matches, Dimitrov won but by very narrow margins, most recently a final set tie-break last month in Brisbane.

Their tennis brings out the best of each other—pacey players, shot-makers, able to control with slice or take the net with confidence, and expressive around the court—and this produced the most entertaining and high-quality tennis of the tournament so far.

The first set was nip and tuck to 4-4, when the first chance to break came to Dimitrov. He stepped into the court, taking the ball early and confidently went for his shots, but Baghdatis, who had opted for aggressive tactics to beat Richard Gasquet, did the same here. He served and volleyed, out-sliced the youngster and the set went to a tie-break via love holds on both sides.

It was the Cypriot who took the first point advantage and opened it to 6-4 with a winning serve. It took the finest of rallies—teasing sliced exchanges and angled punches to both wings—to close it out for Baghdatis.

The older man needed to sustain his stamina, but he came under pressure at the start of the second, and an aggressive Dimitrov broke in the fifth game. But with both determined to dominate, each had to fend off break points in the next two games, and Baghdatis’s boldness was finally rewarded with a break back for 4-4. Dimitrov’s racket ended in pieces—a rare show of temper from either man in a genuinely warm-spirited and sporting match.

Baghdatis had to dig deep to stay with the fluid and refocused Bulgarian, saved more break points, and a love service game from Dimitrov took it to another tie-break.

Now an hour and three-quarters old, Baghdatis looked weary and sore, and that showed in the score: a 7-0 whitewash with some scintillating winners flying from the Dimitrov racket. An opening love service game took his run of points to 15 and Baghdatis was looking down the gun barrel at 0-40—bringing Dimitrov’s run of points to 18.

Baghdatis leveled to deuce but could not fend off the inevitable, a break, though it was only just enough to take Dimitrov through, as a second-wind saw Baghdatis twice have chances to break back. After more than two-and-a-half hours and 231 points, the match went to a jubilant Dimitrov, 6-3. He leapt the net—“that was my last powers. Luckily I didn’t injure myself”—to embrace his smiling friend.

And if there was any doubt about the quality of the match, the crowd banished it. They cheered their approval—and rose to their feet to acknowledge the young man who seems finally to be marshalling his multitude of talents towards the top. He has charm, good looks, a creative all-court game and a truly dramatic single-handed backhand.

Dimitrov’s popularity, as well as his semi-final place, is assured, but a place in the final will require another step up. He will face del Potro, who punched 10 aces past a determined Nieminen in what proved to be heavyweight hour and a half.

Dimitrov and del Potro have not met before, but all the signs suggest it will be a memorable first time.

But which man a decade older than Dimitrov would take their semi-final place? The answer became the news of the tournament…