Rotterdam 2013: Indoor conditions have a particular appeal for some of the biggest stars in the game, writes Marianne Bevis 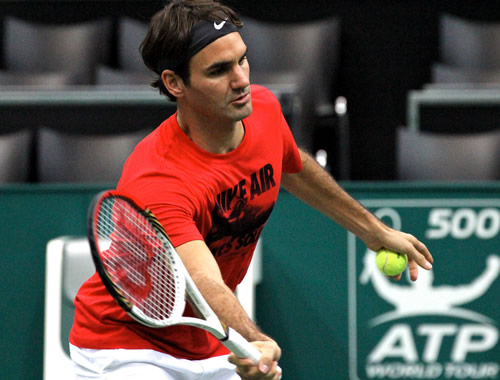 Roger Federer is among the star names in action in Rotterdam Photo: Marianne Bevis

The rigours of the tennis year begin early and demand much.

Steamy tournaments in Doha, Chennai and the Antipodes barely work limbs and rackets into competition mode before the Australian Open confronts players like a mountain without altitude training.

The first Grand Slam of the year hits the tour without even a 500, let alone a Masters event, to ease the transition into a new year of combat. And it’s hotter than most, this feisty Major—etched in brilliant colour, deep shadow and some of the latest finishes in the calendar.

Then comes February and the choice of two very different roads.

Some will take the high road to the other side of the Pacific to bathe for a month in the gentle embrace and warm sunshine of South America: the four glamorous clay tournaments of the “golden swing”. The orange dust offers a brief respite from the hot and punishing hard courts, but then it demands a speedy readjustment back to the blister-inducing heat of the first two Masters of the year—back to back—in Indian Wells and Miami.

The majority, though, take the low road to the temperate calm of the early-season indoor swing. These men head to the familiar environs of Europe and North America and stay with the synthetic, true surface that bridges the Australian Open and the double-headed March Masters.

Indoor conditions have a particular appeal for some of the biggest stars in the game. So while Rafael Nadal has headed to his beloved clay to rehabilitate a knee injury, the king of the indoors, Roger Federer, hopes to make hay in Rotterdam—just as he did last year.

A quick glance at the statistics confirms what Federer’s results over the last couple of years proclaim: He stands fifth on the all-time list of indoor players, and is top amongst all active players with a 224-55 win-loss record. Between winning the Stockholm title in 2010 and losing in the final of Basel last autumn, he lost just one match on an indoor hard court, the semis of the 2010 Paris Masters, and he won seven indoor titles.

But even he has his work cut out to defend his Rotterdam title, not least because the second seed is the very man who ended that indoor run in Basel, Juan Martin del Potro. Not content with that, he beat Federer in the round-robin phase of the World Tour Finals in London to finish 2012 at No3 in the ATP indoors reliability index, winning the most matches in claiming three indoor titles in Marseille, Vienna and, of course, Basel.

The big Argentine has taken things slowly this season, so has opted—rarely for him—to play doubles in Rotterdam to sharpen his game. He admitted at his pre-tournament press conference that he wanted to improve his serving and volleying skills, and has chosen a fine exponent in partner Michael Llodra. And despite del Potro’s “we gonna see what we can do, but I’m not a specialist”, it will be pairing worth watching. 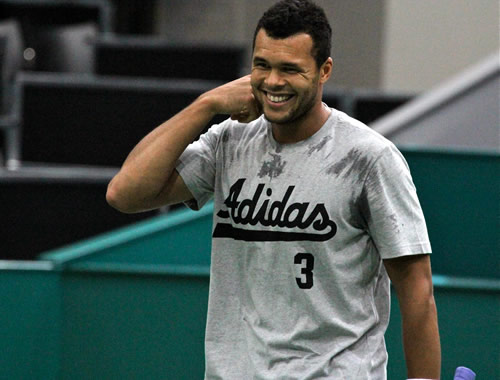 Del Potro was also the losing finalist to Federer here last year, and ran him to the wire on the French Open’s clay and on the grass of the Olympics. Ranked No7 in the world, del Potro is higher than he has been since 2010 and, asked if he thought he was back to near his best, he came as close to agreeing as this modest man ever gets:

“I think I’m playing well. I didn’t have a very good Australian Open, but I like to play on indoor courts, and if I’m training hard, I will be ready to be in the top 10 for the next few weeks also.”

He has been unfortunate in his first-round draw, though. The exciting Frenchman Gael Monfils was a late wild card substitute for Philipp Kohlschreiber, and the former world No7 has shown some return to form since injury last year. His most successful surface also happens to be indoors, where he has won three of his four titles.

Last week Monfils played in Montpellier and took eventual champion Richard Gasquet to three sets in second round. His encounter with Del Potro is likely to be one of the features of the first-round—with the winner possibly meeting Gasquet in the semis.

The No4 seeded Gasquet has been steadily and quietly climbing the rankings to break back into the top 10 for the first time in almost five years. And despite his perceived preference for clay, he also shines indoors. He won the indoor title in Bangkok last autumn, was beaten by del Potro in the Basel semis, and was also one of the first champions of 2013 with the outdoor title at Doha—before taking the Montpellier title this weekend.

He is drawn to face another Frenchman, the fast-rising Benoit Paire—seeded 8 and Gasquet’s opponent in the Montpellier final. Also in the bottom half of the Rotterdam draw is Gasquet’s semi-final victim this week, Jarkko Nieminen, then the man who almost put Federer out in the semis here last year, Nikolay Davydenko, and home-favourite, Robin Haase, fresh from a semi finish in Zagreb.

Aside from all this indoor prowess, the most intriguing first-round encounter of the bottom half is between young men both tipped for stardom, Bernard Tomic and Grigor Dimitrov. Separated by just six months in age and four ranking places—44 and 40 respectively—they have never met before.

Federer faces some severe challenges of his own before the looming del Potro. Mikhail Youzhny is another player with a fine indoor record: five of his eight titles, including Rotterdam in 2007. He comes to the Netherlands with a semi finish in Zagreb, too—but in 14 matches against Federer, the Russian has won only three sets.

Federer’s third round may be tighter. Julien Benneteau took him to five sets at Wimbledon last year and beat him at the indoor Paris Masters in 2009. He’s had some decent wins this season, too. But the Frenchman will first have to get past the outspoken, hot-headed but hugely talented 6ft 8in Jerzy Janowicz. The Pole is at a career-high 25, reached the final of the Paris indoors last autumn and has the kind of big-hitting tennis that can trouble many, including Federer.

Beyond that lies another interesting test for the Swiss—No3 seed Jo-Wilfried Tsonga, who lately took Federer to five sets at the Australian Open. Their previous eight meetings were in 2011—and Tsonga won at Wimbledon and Montreal, and took Federer to three sets twice on the indoor courts of the World Tour Finals.

Tsonga is brimming with joie de vivre since taking on new coach Roger Rasheed. Tsonga and Federer, good friends, also seem to bring out the best in each other. They could well produce more fireworks if they meet in the Rotterdam semi—and the outcome is just as hard to call as a Federer-del Potro final.

And one nice footnote: Federer practised twice at the Ahoy Stadium on pre-tournament Sunday—and both del Potro and Tsonga confessed that they enjoyed the experience hugely.

So let the battle for indoor prowess begin.