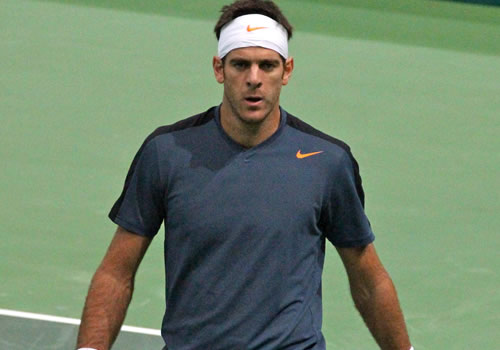 It was still only day two, yet there had already been rather more upsets than the 40th anniversary edition of the prestigious Rotterdam 500 might have liked.

In the headline match of Monday night, the top-ranked of eight French men in the draw, No3 seed Jo-Wilfried Tsonga, bit the dust against Dutch wild card, Igor Sijsling. The much anticipated revisiting of his five-set thriller against Roger Federer at the Australian Open would have to wait for another tournament.

No7 seed Jerzy Janowicz was shown the door in the first match of the tournament while Nikolay Davydenko ended Monday by quashing No8 seed, Florian Mayer in very short order.

The second day was hit not just by upsets but by injury and sickness. Mikhail Youzhny, a stalwart of eight previous Rotterdam draws and champion in 2007, was leading 4-1 in the final set when he shook hands with Thiemo de Bakker and retired with a hip injury. That made it two Dutch wild cards into the second round, but the home nation’s third man, their highest ranked, fell to qualifier Ernests Gulbis.

Another former champion, Michael Llodra, had to withdraw from both singles and doubles with illness, and the little-known qualifier, Matteo Viola—ranked 145 in the world—beat No34, Marcel Granollers. And still only two-thirds of the draw had been played.

So it was fingers crossed when the No2 seed, finalist last year and with two indoor titles at the end of last year, Juan Martin del Potro, took the limelight as dusk fell over Day 2 in Rotterdam.

He played a wild card ranked 107—though those facts masked a dangerous opponent. Gael Monfils had behind him a career-high ranking of No7 in July 2011, and last year finished outside the top 20 for the first time since 2007 as he struggled with a right knee injury. He missed three-and-a-half months prior to returning in mid-September and last month reached the semi-final in Auckland. He then put in a long and brave fight at the Australian Open, losing to Gilles Simon in a gruelling five-setter.

He and del Potro had never met before, though they have known each other since junior days. Their contrasting styles—del Potro’s restrained power against Monfils’ extrovert and extravagant court-coverage—promised much.

It looked, after the first three games, as though it would be over very quickly. Del Potro opened serve and looked his efficient best, while Monfils opened with a double fault and followed it with two more errors to face three break points. He pulled back two of them but another error handed over the break, and in minutes the Argentine swept through a love game to lead 3-0.

But then Monfils began to find some range and rhythm. He also showed some patience in a few extended rallies, and threatened the del Potro serve in the fifth game, but his best chance came at the last gasp. With del Potro serving for the set, Monfils drew level at deuce with some outrageous defence, performing retrieving splits on both wings a la Novak Djokovic before picking up a drop shot and finishing with a high backhand volley.

The rigours of the rally drew a time violation warning for del Potro, and Monfils fired a forehand winner down the line for break point. Now the Argentine’s fast-evolving serve and volleying skills came to his rescue. Two volleys and a forehand winner took the set, 6-3.

However Monfils seemed to be improving with every point. He has a deceptive power, looking almost casual but generating great speed and depth. He began to mix in drop shots to test del Potro’s speed—which was, in fact, pretty nimble. But a drop-lob-shot combo, executed so precisely, proved too much for the racing Argentine.

Indeed it was the Frenchman who worked the first break chance of the set in the second game, but two forehand winners from the mighty arm of del Potro snuffed it out. Monfils in turn resisted a break point in the fifth game.

They briefly hit a purple patch mid-set, culminating in the point of the match in the seventh game. Monfils went 0-30 down but pulled it back with some extraordinary retrieving. He held serve with an extravagant combination of dunk-shot, sprinting chases to the baseline and a passing winner. He jumped and pumped in celebration, and looked ready to race off with the set.

Now the contrasting mental strengths of the two came into play. Del Potro barely put a foot wrong, hitting to the lines, making timely moves to the net for put-aways, putting pressure on his opponent. Monfils, at 4-4, hit a run of shots long and was broken to love. It was a safe bet that del Potro would serve out with ease: He took set and match, 6-4.

Del Potro, then, lived up to his ranking, seeding and talent. He is formidable in head and arm, and is also developing greater mobility and a greater willingness to shorten points at the net. He afterwards highlighted this part of his game: “Against Gael, you have to finish the points at the net: He puts balls back all the time, and if you stay at the baseline you have a chance to miss your shots, so I came to the net a lot and did it well.”

All in all, it is a formidable package, showing how he managed to get the better of Federer in both previous meetings indoors.

The Swiss opens the defence of his title tomorrow against, on paper, an easier man. Grega Zemlja broke the top 50 for the first time at the end of last year, but is now at 64. Two seeds have gone from his half already, but the third one, Gilles Simon, has had some success against Federer in the past.

Nevertheless it is looking increasingly as though Rotterdam is heading for its hoped-for climax between arch rivals, Federer and del Potro.