Roger Federer is back in town—in an ice-cold Rotterdam—and everyone wants a piece of him, writes Marianne Bevis 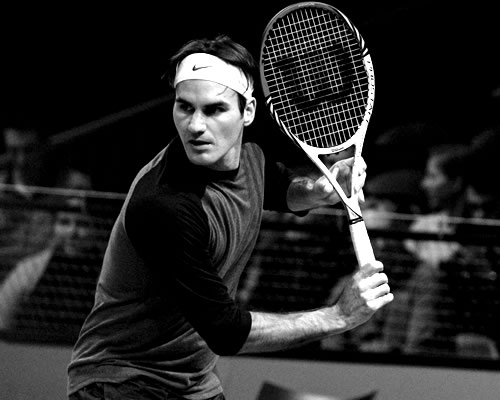 In case it’s escaped the notice of anyone in the Netherlands, Roger Federer is back in town—in an ice-cold Rotterdam—and everyone wants a piece of him.

Who can blame them? He’s defending champion at this, the first 500 tournament on the ATP tour. He has dropped some big events from his trimmed 2013 schedule—the Miami Masters and his home event in Basel—but chose to keep Rotterdam. He is personable and articulate with the media, generous with the fans, plays the role of ambassador with the sponsors—and then there’s the small matter of his tennis.

A quick skim of the ATP notes ahead of Federer’s opening match of the tournament—against the No64-ranked Slovak Grega Zemlja—outlines the achievements: a record 302 weeks as No1; 17 Grand Slam and 21 Masters titles; 53 straight Majors, reaching at least the quarters in the last 35.

Another skim of the 2012 stats also proves that Federer’s star is far from waning: six titles from 10 finals, including a seventh Wimbledon crown and Olympic silver; 71 match wins, his most since 2006; and an 11th World Tour Finals, reaching his eighth final.

But it takes a relaxed half hour at a Federer practice session to add texture to the bald facts and figures.

In a packed Monday whirligig of commitments, he took to an outside court for a well-publicised two hours against the rising talent, David Goffin. It was enough to suck crowds from a high-profile contest on Centre Court between Grigor Dimitrov and Bernard Tomic towards a raucous Court 1. For it is in close-up that the combination of languorous movement and precision fire-power adds light and shade to the Swiss tapestry.

His serve motion looks effortless, but can switch from centre-line bullet to a vicious wide kicker at will. His forehand may be his powerhouse, but the backhand is a thing of single-handed destructive beauty. He can as easily glide to net for an efficient volley as drop a short winner from the baseline. In reality, there are few shots, from few places on a tennis court, that he cannot hit.

And while it seems to come easily, this close-up perspective reveals something of the mechanics below the skin: that repetition brings rewards, that short exchanges with colleagues refine tactics. It also shows fleeting expressions of dissatisfaction when a shot goes awry.

The atmosphere, though, is far from that of a workshop. There is a buzz, constant movement, the occasional cheeky exchange between fan and Fed. Children creep to the barrier to take a secret picture, older fans crane for snaps from further back. But they all know that their chance for autographs, a quick word, even a photo with their idol will come in due course—he will linger long after the practice is done.

Yet even though this is no match day, the top seed’s hours are packed from morning to night. Prior to practice, he had already spent half an hour in pre-tournament press, fielding questions about Rafa and Rotterdam, drug-testing and the Pope’s resignation. His touch was as light and assured here as on the court.

On Nadal’s return to the tour: “I didn’t see any matches. I saw a few pictures: He looked good—[smiling] nice shirt. Still a left-hander. I was hoping he came back as a right hander: He didn’t!”

On whether tennis needs more drug-testing: “Absolutely… I didn’t get tested after my semi in Australia, which I told the people. To me that is a big surprise. We should be doing that, we should be doing biological blood passport, I think we should store things away, I think that would scare a lot of cheaters away. I think it’s important to make sure the sport’s credible and clean, and players don’t even get the idea they can cheat. And then obviously we need more funding, maybe the Slams should put in more money…they have a lot to lose if their players are not clean.”

On the Rotterdam tournament: “I had such a wonderful time here last year, I’m very happy to be back. I feel very welcomed here every time I come. I think the Dutch people know me over the years now. Very friendly people. I enjoy that.”

One suspects it is not just the Dutch who welcome him with open arms, but when in Rotterdam…

He revealed that the tournament had agreed that he play his first match on Wednesday, since he had only got back into serious training a few days before his arrival here:

“I feel like I’m playing really well—another important practice session for me today, and one more day to get ready. I asked for a Wednesday start and I’m happy they granted me that wish.”

They were unlikely to turn him down when he had turned down few of their requests either.

The day had started with a photo shoot at the giant ABN AMRO tennis racket in Rotterdam’s city centre to mark the tournament’s 40th anniversary. After press came television interviews, that two-hour practice and an autograph session in the Ahoy Centre’s public plaza. Then, after a quick switch from tracksuit to lounge suit, he schmoozed with sponsors and finally took to Centre Court with Esther Vergeer for the formal opening ceremony.

It’s a job that, 14 years after his first match at Rotterdam—he lost in the quarterfinals to eventual champion Yevgeny Kafelnikov—almost 1,100 matches and more than $76m of prize money, he could probably do in his sleep.

But if he has become jaded, it rarely shows—though he let slip when asked about his South American exhibition tour this winter that he was shocked by his reception:

“For years and years, people were always hoping that finally I would come and play and that made the excitement level extremely big, it was the trip of a lifetime [but] I don’t know if I will do it again. It was sometimes a bit of a funny feeling being the centre of attention that much—being so popular at times—but it was a great experience. When I now travel the world, I have all these people see me practise, it’s gotten normal to a degree, but I still enjoy it.”

It would be easy for “the Federer effect” to leave other players in the shadows: witness that migration of fans from Dimitrov’s prime-time match to watch the Swiss in practice. But even amongst the ranks of rivals, there’s little but admiration:

Dimitrov: “Of course it’s a compliment to be compared with Federer. I think I’ve proved myself a little bit that I’m not like him, but he’s the greatest of all time. To me, he’s one of the greatest ambassadors of tennis I’ve ever seen.”

Del Potro: “Just finished practice with Roger: He’s a friend and we also practise a lot together.”

Tsonga on touring South America: “It’s my job, it’s good to win money and live. It was also important for me because it was with Roger, so for me it will be very good memories.”

Such a following means that the stakes are always high: Fans, tournament directors and sponsors expect Federer to see the draw through if not to the title then very close to it.

In Rotterdam, he took the first step against Zemlja with very little trouble—except perhaps for the first four games. He said afterwards that the court was warmer and the balls flew, and he double faulted and shanked his way to two break points, resisted two deuces, but held. It turned out to be something of a tease, and in the next game it was he who fired off three outright winners to break Zemlja to love.

With the shackles off, he went into serve-and-volley mode, held for a 4-2 lead and then broke again in the ninth for the first set, 6-3.

The second set was even swifter. Federer was taken to deuce in the first game with a spate of missed first serves, but broke in the second and fourth to lead 3-1. Once his backhand down the line starting firing winners, too, the writing was on the wall and he sealed the match, 6-1, after 57 minutes.

Federer next plays a man born a hop, skip and a jump from here, Thiemo de Bakker, but even with some divided loyalties, it seems likely that the majority will still cheer on favourite Federer.

Elsewhere in the draw, the French continued their progress with Gilles Simon the first man into the quarters, followed by Julien Benneteau—they each lost only four games. Richard Gasquet’s win over Viktor Troicki was also impressive.

No6 seed Andreas Seppi lost to the qualifier from Germany, Matthias Bachinger, and Marcos Baghdatis advanced when Benoit Paire retired sick at 0-4 down in the third set.