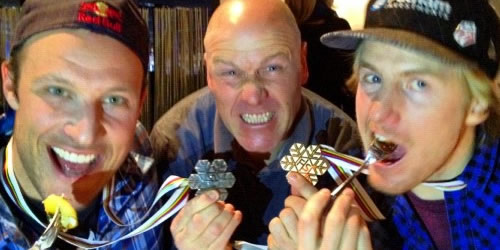 It’s been another busy week on the slopes, with the World Ski Championships taking place in the Austrian resort of Schladming, and a host of other snow and ice events.

There’s been more action, more British success and a few big spills. So, to a jam-packed blog.

In skiing’s second-most prestigious event (after the Winter Olympics), Norwegian star Aksel Lund Svindal confirmed his dominance of the sport this season. In the blue riband race of the World Championships – the men’s downhill – Svindal produced a devastating run to win the gold medal, just three days after winning a bronze in the Super G. And Svindal joined an exclusive club of racers, featuring the likes of Bernhard Russi and Jean-Claude Killy, to win two downhill golds after claiming the title in Are, Sweden back in 2007. On a leg-burning course, with the top section shrouded in cloud, the 30-year-old was the only skier who looked in control of his race from top to bottom. And it showed on the time sheet. When Svindal took the lead from Frenchman David Poisson, who finished third, he did so with an advantage of 0.97s. Italian silver-medallist Dominik Paris was the only person to come close to catching the Norwegian, but his run was still 0.46s slower.

Svindal’s father said after the race: “It’s unbelievable. From the very start, you could see he was going to down something big. I was so nervous and am so delighted he made it.” Svindal himself celebrated by taking a photo of his bare feet and posting it on Instagram. As you do. He said: “Best part of my day: crossing the finish line and winning the world championship. 2nd best part is getting some time to myself to enjoy the win.”

The women’s half of the championship began with a horrible crash for American Lindsey Vonn, who is out for the rest of the season after rupturing cruciate ligaments in her right knee. The 28-year-old was expected to dominate in Schladming, but crashed out of the Super G race on Tuesday in tricky conditions. Vonn underwent surgery on Sunday and hopes to be fit in time for the 2014 Winter Olympics in Sochi, which are now just a year away.

Elsewhere, Slovenian Tina Maze, who has dominated the women’s tour this season, won the Super G but France’s Marion Rolland was a surprise winner of the downhill. The 30-year-old was previously best-known for crashing out of the 2010 Olympic downhill just seconds into the race at Vancouver, and she had never won a World Cup race before claiming the gold on Sunday. She said: “To win gold is obviously incredible, I dreamt about it like every young athlete. You have to believe in your dreams and your goals and fight hard.”

It was bad news for Britain’s Chemmy Alcott who had recently resumed skiing after suffering a horrendous leg break two years ago. The 30-year-old crashed during training and was ruled out of the remainder of the world championships with a hamstring injury. Alcott wrote on her Facebook page: “This is by no means the end, I have shown my strength before. The timing blows but better now than in a year!”

The men’s Super Combined event is still to come and both the men and women will race in the Slalom and Giant Slalom later this week.

British skater Elise Christie, fresh from winning a silver in the 1,000m in Sochi – a medal that clinched her first overall World Cup title – won again last Friday. The 22-year-old Scot claimed gold in the 1,500m at the final World Cup event of the season in Dresden. The short track season culminates in the World Championships in Hungary in March.

Following on from the success of James Woods, Britain has had more success in ski Slopestyle, this time in the form of 17-year-old Katie Summerhayes. Summerhayes won World Cup silver in Silvaplana, Switzerland, to become the first female British skier to make a podium in 19 years.

She said: “To finish second in my first event back is just amazing. It’s a really exciting time for the GB freestyle team right now with Sochi coming up next year. I’ve always wanted to go to the Olympics and after today it seems closer than ever.”

The Sheffield skier had been battling back from a knee injury but, with Slopestyle set to make its Olympic bow in Sochi, Britain has high medal hopes in the form of Woods and Summerhayes.

After a good few weeks for British winter sport, the men’s ice hockey team unfortunately failed to qualify for the 2014 Sochi Winter Olympics. They lost all three of their qualifying matches to Latvia, France and Kazakhstan.

To celebrate Britain’s first women’s skiing medal in 19 years, enjoy some footage of silver-medallist Katie Summerhayes on the slopes as she was recovering from a serious knee injury. Looks like the training worked.

Log on to The Sport Review again next weekend for all the news from the conclusion of the Ski World Championships in Schladming and the best of the rest on the snow and ice.