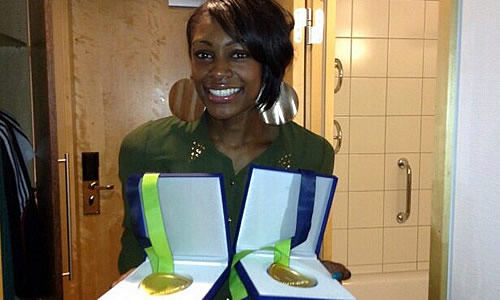 Great Britain scored double relay gold as they brought the curtain down at the European Indoor Athletics Championships in impressive style.

Michael Bingham, Richard Buck, Nigel Levine and Richard Strachan won the 4x400m title – although only after they were reinstated after an initial harsh disqualification.

And Perri Shakes-Drayton scored her second podium top spot in just a few hours to help erase her painful Olympic memories in Gothenburg.

Hurdles specialist Shakes-Drayton, 24, was one of the poster girls of last year’s Games, born and raised just a few miles from the Olympic Stadium in Bow, east London.

But she failed to make her target final and later admitted she wanted to forget the experience as quickly as possible.

However, she followed her earlier individual success over 400m by anchoring the British women’s 4x400m quartet to a dominant gold on the final day in Sweden.

Eilidh Child, a silver medallist behind Shakes-Drayton in the 400m, gave Britain a first leg lead they never let slip and Shana Cox and former Olympic champion Christine Ohuruogu hammered down that advantage.

“I’ve had a great day at the office and I was delighted the effect of winning this morning wasn’t too great and I had just enough to bring the girls home,” said Shakes-Drayton.

There was certainly no doubting the validity of the win, unlike the men who followed.

Strachan’s winning margin seemed convincing but there were worrying moments after a transgression by Buck, when he stepped off the track after some pushing and shoving, appeared to have cost them gold.

But some quick-thinking by head coach Peter Eriksson and his support staff got the medal reinstated within ten minutes.

“I took the baton off Michael and I knew it was going to be tight,” said Buck.

“I saw the Polish guy outside me really vying for it and I thought ‘I’m getting there first’. I really put it in and when he came in and landed on me I did the best I could to sit in there but where else could I have gone?

“I was trying desperately to stay up and I had to drop one foot out to come back in again.

“It’s so good to be a champion, it’s what was missing – I’m so happy. I just want to say thank you to everyone that has ever helped me and especially my granddad who has been seriously ill in hospital this year.”

Meanwhile, Asha Philip declared herself happy after finishing sixth in the women’s 60m final, equalling her 7.15 seconds personal best in the process, a reward after two years of injury troubles.

“I know what I need to do to start cracking those podium positions. It’s been a tough few weeks but I’m looking forward to getting back to training and working towards the summer.”

Great Britain finish the championships with eight medals, including four gold – compared to the eight medals, three of which were gold, they claimed in Paris two years ago.

“It’s been a great championship, all our women reached finals and only three guys didn’t – that is a great outcome and justifies our selections,” said head coach Peter Eriksson.

“It’s a young team and we’ve seen season and personal bests throughout the three days.

“I’m happy with our performance, we won more goals than the last European Indoor Championships and that’s very pleasing.”

Aviva Premiership wrap: Exeter do the double over Harlequins