Athletics: Shakes-Drayton fastest as Brits turn out at European indoors 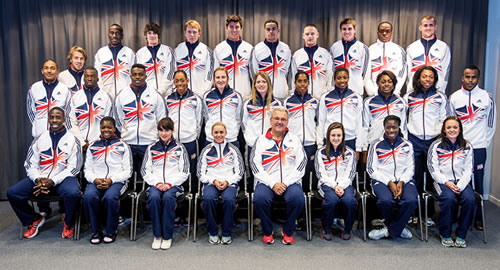 United: Team GB pose for a picture ahead of the European Indoors Photo: UK Athletics

Perri Shakes-Drayton admitted she achieved everything she had hoped for after qualifying for the 400m semi-finals at the European Indoor Championships in Gothenburg as the first fastest.

Drawn in the first of four heats, the 24-year-old looked comfortable as she hit the front before winning by over a second ahead of Sweden’s Moa Hjelmer with a time of 51.70seconds.

That saw Shakes-Drayton progress to the semi-finals as the quickest qualifier and she will be joined in the next round by fellow Brits Eilidh Child and Shana Cox.

Child too won her heat in 52.05 to place second fastest overall behind Shakes-Drayton while Cox took one of the fastest loser spots after finishing third in her heat in 52.99.

And, now with a favourable lane draw for Saturday’s semi-finals in Gothenburg, Shakes-Drayton insisted she got everything she wanted out of her opening run.

“Funnily enough my coach was talking to me through a window because he never had a pass to get through [to the arena] but there was a lot of good hand sign language,” said Shakes-Drayton.

“I always want to run well and I wanted to get a good lane for the semi-final. I didn’t expect to go out that fast but I have got to look after myself.

“It is always nerve racking in the heats but I knew I was capable of getting through and I won the race. I didn’t want to come second.”

Britain’s trio in the men’s 400m all came through the heats unscathed too with Nigel Levine leading the way in third before Michael Bingham and Richard Strachan in fourth and fifth respectively.

Levine clocked 46.68 to finish second in the fourth and final heat behind European outdoor champion Pavel Maslak while Bingham was second too behind Pavel Trenikhin.

Strachan won heat three but was four hundredths of a second slower than Bingham in 46.96 with Levine under no illusions as to how tough it will be for him to eventually challenge for a medal.

“It was alright. I tried to win my heat but Pavel [Maslak] is quite a strong guy so I have got to big him up,” said Levine. “He is the European champion outdoors so it isn’t going to be easy.

“You have got to work for it. If you can’t run well in the first round you are in trouble. I will go back and talk to my coach and move on to the semi-finals.”

Meanwhile Shara Proctor was the only other Brit in action in Gothenburg and she also made sure that she would compete again after finishing joint second in long jump qualification.

No one in the 19-strong field managed to hit the automatic qualifying distance however one jump of 6.61m first time on the runway was enough for Proctor to advance to the final.

Proctor toyed with the idea of jumping again in order to hit the automatic qualifying distance of 6.65m however she resisted and admitted not doing so was the wiser option.

“I just had to be smart about it. I kept looking at the results. Did I want to jump the next two rounds or be smart? And I was smart,” said Proctor.

Six Nations 2013: Best certain Jackson will bounce back for Ireland