Austalian Grand Prix 2013: Lotus driver Kimi Raikkonen gets off to a winning start after coming from seventh on the grid 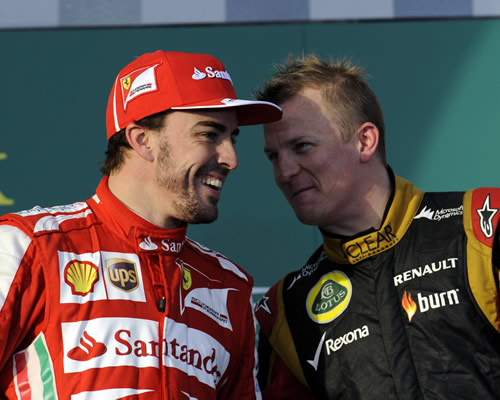 Kimi Raikkonen will head to Malaysia with the early initiative in the race for the 2013 Formula 1 drivers’ championship after fending off Fernando Alonso to take victory in Melbourne.

The Lotus driver qualified seventh but produced a stunning drive as Ferrari’s Alonso finished second, while world champion Sebastian Vettel had to settle for third after starting in pole position.

As the red lights went out for the first time in 2013, the Ferraris of Felipe Massa and Alonso surged through the pack to take second and third while Vettel raced away.

The front-runners had decided to start on super-soft tyres and all pitted before lap 15, with Vettel held-up by the two-stopping Force India of Adrian Sutil after the shake-up.

After the pair pitted at the same time on lap 21, the three-time world champion found a way past – though trailed Alonso who had stopped again to take advantage of their scrap.

But both had their work cut out to catch Raikkonen and Hamilton, whose longer stints between pit stops were paying off midway through the race.

Meanwhile, Hamilton’s ex-teammate Jensen Button struggled to look after his tyres and was toiling away in tenth.

An Australian has never won a home grand prix and Mark Webber – just in front of Button – was looking like continuing the trend as he struggled for pace in his Red Bull.

While Hamilton eventually dropped off the leading pack, Raikkonen was out in front as the race approached the closing stages.

However, Alonso was catching the Finn at a rate of knots and the gap was down to seven seconds by lap 53.

But Raikkonen responded and kept the Spaniard at arm’s length to take the opening win of the season.

The teams will only have to wait until next week for Sepang, where Alonso will look to go one better and make it two wins in two years at the circuit.