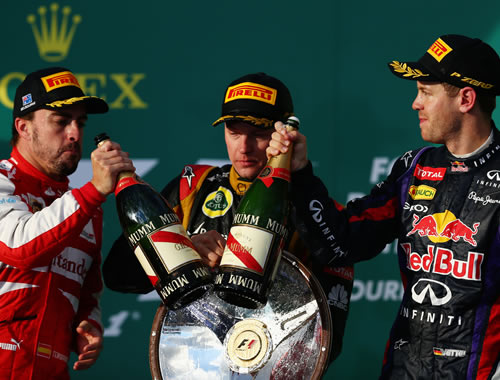 Raikkonen is making a good team that much better

Just like Fernando Alonso at Ferrari, Kimi Raikkonen has the ability to grab the (red) bull by the horns. It’s easy to forget the man is a world champion after he slinked off to muck around in a rally car for a while, but after showing tantalising glimpses of what he could for Lotus last year, he announced his intent for this season in typical ice-cool style at Albert Park. The Lotus isn’t the fastest car on the grid – though nowhere near as bad as Romain Grosjean has the habit of making it look – but in era which a team subsidised by an energy drink company is streets ahead, a driver of the Finn’s ability can make all the difference.

Qualifying and the race are two different beasts

Whether you were settling down to eat your dinner or waking up bleary-eyed to catch the race, the familiar sight of Sebastian Vettel at the top of the qualifying timesheet may have had you reaching for the remote in anticipation of another procession. And why shouldn’t the German start the season as he means to go on, and on, and on? Yet to the delight of the neutral, things didn’t quite go to plan – struggling to convert his one-lap blitz into more meaningful race pace. Rather, it was a case of which car could eke out as much performance on those grained-up super-softs from qualifying and it was Raikkonen’s Lotus which prevailed. Pole position must be taken with a generous pinch of salt as worryingly for the world champions, they lacked a punch when it truly mattered.

It’s official – Massa is back

Well, back to being a very able deputy. His horrendous accident way back in 2009 at the Hungarian Grand Prix clearly – and understandably – made his form take a nosedive. But after three excruciating years, it was looking like time to put the Brazilian to pasture – regardless of any sentiment Ferrari retained. However, a promising back-end to last season was backed up in Melbourne and Massa was even leading his more illustrious team-mate at one point before finishing a very competitive fourth. He’s what any team principal wants of their number two driver, really – little ego and fairly happy to take a backseat, but strong enough to deliver a bucket-load of points and even challenge his team-mate. Welcome back.