Australian Grand Prix 2013: The grid will now be decided on morning of race day after heavy rain hits Melbourne 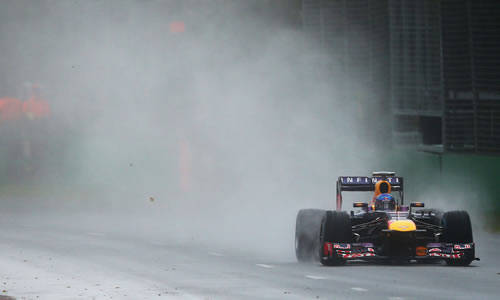 Wet conditions delayed qualifying for the opening race of the Formula 1 season, with drivers asked to return at 1100 local time on Sunday to decide the starting grid for the Australian Grand Prix.

Q1 was delayed by half an hour because of standing water and, as the drivers looked set to start Q2, continuing showers saw FIA chiefs postpone proceedings.

Lewis Hamilton was the first to fall foul of the weather, clipping the grass in turn two and damaging a rear wing, though he still ended up 10th-fastest.

Felipe Massa had also spun off, leaving parts of his Ferrari scattered across the Albert Park circuit, while Mercedes driver Nico Rosberg set the pace ahead of Ferrari’s Fernando Alonso and Lotus’s Romain Grosjean.

Williams made a late decision to go with intermediate tyres and had seen Pastor Maldonado go out in Q1, followed by Sauber’s Esteban Gutierrez.

But the drivers will return on Sunday morning hoping for better weather conditions and searching for a first pole position of the season.