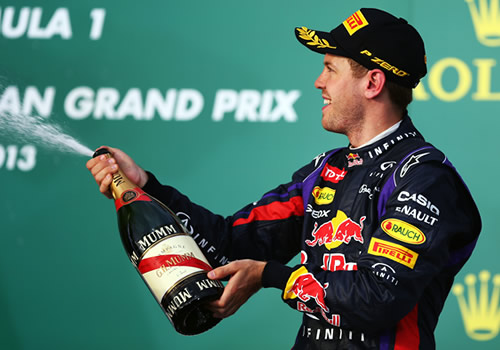 Sebastian Vettel refused to be downbeat after he finished third at the Australian Grand Prix despite the Red Bull driver starting from first on the grid.

Lotus driver Kimi Raikkonnen powered to victory from seventh ahead of Ferrari’s Fernando Alonso at the season-opening race at Albert Park.

Vettel, who is aiming for a fourth consecutive drivers’ championship title this year, insists he was pleased with his overall display despite the initial disappointment of failing to convert pole position into first place.

“I think you’re always a little disappointed when you start first and don’t finish first, but overall it was a good weekend for us,” said Vettel.

“We had a good day today with a pole and a podium – but in the race we were a little too aggressive with the tyres and lost the front and the rears, while others did a little better. There are always areas where you can improve, but the result we got today is fair.

“We didn’t see Kimi on the track, he was too quick and Fernando jumped us at a vulnerable time – but we can be happy with third.”

He said: “Starting from the front row, third and sixth obviously wasn’t the result we were targeting, but all things considered with the way that the race panned out, I think it was the optimum we could achieve.

“Lotus seemed very light on its tyres, with Kimi being able to make a two-stop race really work for him. I think in the cooler conditions today we weren’t in the optimum window with these tyres, but nonetheless it was a very positive start to the championship with a podium finish and a sixth place.”