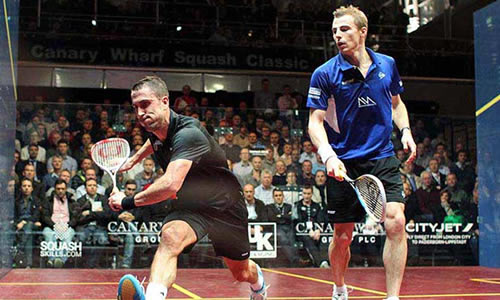 The victory will be doubly sweet for the No4 seed, having struggled with injuries this season and with a head-to-head record against Matthew which, in his words, is “still is embarrassing, really” – two wins to Matthew’s 20+ plus, 18 of which are in PSA tournaments.

“I’ve had a few injuries this season and to put a performance in like that in front of my home crowd is pretty special,” said Barker.

“It’s good to get a win over Nick. I got a bit lucky at the end; I was fishing a bit, using any trick of the trade.”

He certainly did employ some – intelligent movement, let’s say, at the end of the fourth, going from 8-8 to matchball at 10-8 courtesy of two dubious strokes; the latter of which when he shaped up to hit a volley then decided – or perhaps given what he said, engineered – to instead take a step back, as if to hit it after the bounce, into Matthew, and call an infringement.

Such play in squash is very difficult to officiate, and not dissimilar to judging if footballers have ‘manufactured contact’ to win a penalty. After the semi-final, an off-duty referee said earlier in the game this decision would have probably only been a let, but that the ref had no leeway at such a crucial juncture.

However, Barker getting to 8-8 up in the fourth was little down to luck; indeed, if anything Matthew probably got the rub of the green earlier in the many tough decisions the referee had to make.

At 7-7 in the first, for instance, the official had made 14 let decisions – nine of which called by Matthew – for the 14 points actually registered on the score sheet.

And in one sequence of three points, Matthew was awarded two borderline strokes, before Barker was given a let for what looked a clear stroke, certainly to Barker and the audibly sceptical crowd.

But in spite of the undeniably crowd-pleasing controversy – or indeed because of it, let calls partly showing faith in player’s retrieving ability – there was some quality squash played, with many long rallies down the lines which then exploded into flurries of activity upon a well-placed drop.

At 7-7, Matthew made an uncharacteristic error on a drop, before Barker executed a similar one to perfection – then, after another controversial let in Matthew’s favour, he missed an ambitious volley drop on the stretch, probably aware of the quality needed to win every point.

On the other hand, on match ball Barker made a tricky squeeze drop to win the game – which was greeted with a big fist pump.

With the standard of play so high, both players went to increasingly fine margins to win points, so the play began to open up.

Barker took the second 11-9. But even then, many believed Matthew’s infamous fitness tenacity and fitness would win out in the end.

So it proved in the third, which Matthew won 11-6. But it was a closer game than the scoreline suggested – being 6-6 at one point, and with both players, judging by their exchanges with the referee, feeling the pressure.

Still, Barker held his nerve to take the match 11-8 in the fourth – even if a little “fishing” was required.

The young Egyptian came out of the blocks firing, significantly improved on what was, by his own admission, a sub-par performance qualifier Henrik Mustonen in the quarters.

From the start, El Shorbagy matched Willstrop in the long rallies – typically Willstrop’s forte – and was able to finish several rallies smartly with clever drops and tight drive-cum-drops, taking the first 11-6.

However, after the first game, though El Shorbagy was still hitting and moving very well, Willstrop was largely able to control the rallies with his long reach from his 6’4” frame and vary the pace brilliantly, going on to take the following games to 8, 9 and 7 respectively.

But Willstrop was full of praise for the rising star, with whom he is already developing an intriguing rivalry – the Yorkshireman having lost to the Egyptian in a thrilling five-game World Championship semi-final last year, but avenged the defeat with a 3-0 in the Kuwait Cup last week, and now here.

“Mohamed and I have developed a great rivalry and respect. He beat me in the semi-finals of the World Championships to show how dangerous and talented a player he is,” he said. “I am happy with my movement and the way I am playing, but there’s another massive battle looming tomorrow, where I will need everything to be working.”