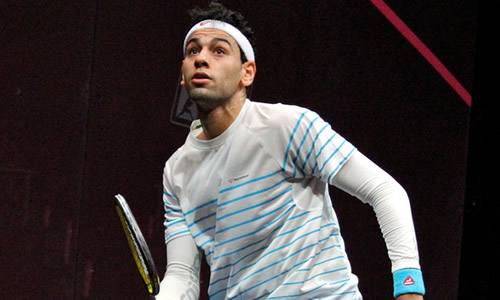 Any suspicions qualifier Henrik Mustonen would be overawed by the occasion – his only previous match against a top-five player was another five-game match that went El Shorbagy’s way – were soon dispelled as he won the first game 11-3 on the back of some delicate drop shots, and errors from his opponent, seemingly trying to finish rallies a little too ambitiously even for him.

He shored up his game in the second, with the result many long rallies showcasing both players’ athleticism and, particularly, the Egyptian’s versatile shot-making – including an occasional kind of topspin drive betraying his fondness for tennis (which usually works to the detriment of squash’s short, snappy hitting).

But El Shorbagy’s powerful play was not enough to overcome Mustonen’s impressive court coverage in the third – the Finn taking it 11-7, and putting the world No5 2-1 down against a qualifier.

It was a very sticky predicament, as Shorbagy admitted, claiming afterwards he was “nervous”, but glad he “found a way to win” against an opponent who played “such a fast game”

Fittingly, the fourth started tensely – firstly with Mustonen slipping and claiming a let for contact, which the Egyptian protested wasn’t there.

“I don’t agree with you,” said the ref. “Of course you don’t,” El Shorbagy retorted, tongue-in-cheek. Then El Shorbagy had a let of his own – before going on to take the next four points in a row, and then take the game 11-6, thanks to some well-placed drives and drops.

Yet any suspicions the young Finn would pale in the fifth – content at his tournament run which has already seen him beat players about 30 and 40 places above him – proved unfounded, despite Shorbagy racing to a 5-0 lead.

Mustonen’s comeback began with some uncharacteristic errors from El Shorbagy, who mishit a drop, got out of position for a stroke against him, then had two mishits in a row – one, inexplicably, on a return. Then, from 7-4, El Shorbagy made a slight error on a drop and another on an ambitious cross-court nick attempt.

But he arrested the decline with a stunning drop volley, making it 8-7 in his favour. Mustonen won the next point – on the third attempt, with two contentious lets, one he had to review to get – with a stroke, after El Shorbagy was only able to dig a tight squeeze drop back out by his body.

Then it was El Shorbagy’s turn for a stroke, and he made it 10-8 with a great drop shot – sealing the win 11-9 on his second matchball.

Despite very willing running, Selby struggled to find ways past Willstrop’s impressive reach – which he so often uses to control rallies from the centre of the court – and could not change his “big fat zero” in their head-to-head.

On the other side of the draw, Nick Matthew had to be at the top of his game to beat world No20 Stephen Coppinger.

The first two games, which Matthew took 11-6, 11-4, may look quite comfortable on paper, but were anything but on court – the Cape Town-based player forcing Matthew to play attacking squash and hit several spectacular smashed nicks to win rallies.

Coppinger played some brilliant squash to take the third 12-10, but could not quite stay at the world no. 2’s level in the fourth, which Matthew took 11-3.

Richards came out the blocks firing, with a vast array of clever shots, all on point – Barker himself admitted he thought he’d played quite well in the first, and that the Surrey player had just been a little better.

After that, though, Barker’s trademark line and length – allied to some smart front-court play, and retrieving that definitely put paid to any lingering injury doubts – told.