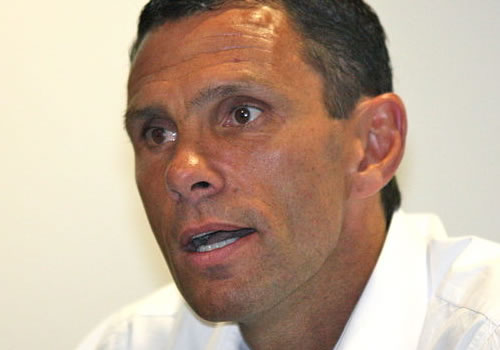 Gus Poyet's side are sixth in the Championship Photo: J Boyes, via Wikimedia

Brighton and Hove Albion completed a 4-1 rout over relegation threatened Huddersfield Town at the AMEX this weekend to cement their spot in the Championship play-offs. With the five teams immediately below the Seagulls all winning, it was imperative for Gus Poyet’s side to keep the momentum going with a win. A hat-trick from Argentinian forward Leonardo Ulloa and a late David Lopez penalty sealed an emphatic three points. Manager Poyet, this week linked with a possible summer move to old club Chelsea, has said he still has his sights set on second spot. Although he’s sure to not be the only manager of the teams in the mix thinking this, four wins out of the last five matches keeps the pressure on those around them. Their opposition however now face a difficult task to keep their Championship status. Under new boss Mark Robins, Huddersfield picked up their first win away to Burnley last week, but being just five points clear of relegation, must put together a run of wins if they are to avoid the drop.

A Cardiff wobble not out of the question?

Cardiff City fell to a 2-1 defeat at Middlesbrough, a side experiencing a poor 2013 and one who picked up only their second win of the year. The league leaders spurned a host of chances at the Riverside, as first-half goals from veteran Kieron Dyer and loan signing Sammy Ameobi gave the home side an unlikely lead. Jason Steele in the Middlesbrough goal was at his best to deny Peter Whittingham, but it was Icelandic midfield Aron Gunnarsson who broke finally scored on 67 minutes. His side were denied a point by Steele who brilliantly stopped Frazer Campbell from equalising in injury team to secure a vital three points to keep Tony Mowbray’s side in the play-off hunt. Manager Malky Mackay was evidently disappointed at his side leaving with nothing and falling to their second defeat in three games. Just five points ahead of second-place Hull City, who got a dominant 5-2 win over Birmingham City, Cardiff, a team so dominant for the majority of the season may have to start doing the unthinkable: looking over their shoulders. Tuesday night’s home game against Derby County could prove crucial.

Peterborough United, who’ve developed a habit of picking up shock results in recent weeks, were at it again yesterday as they came away from Blackburn Rovers with all three points. The Posh silenced the Ewood Park faithful by running out 3-2 winners, going three up in the first half through a Dwight Gayle hat-trick. Like many of Peterborough’s squad, Gayle started out in non-league football, plying his trade for Stansted in the Essex Senior League, before joining Dagenham & Redbridge. Peterborough’s philosophy of searching the lower leagues for talent has worked wonders, and Gayle will be hoping to emulate former non-league players George Boyd, Craig Mackail-Smith and Aaron McLean, who all thrived at Peterborough before moving on to bigger things. His side are now just a point from safety, and the great escape for Peterborough is most definitely on.

Davies having a positive effect on Nottingham Forest

Since returning to the City Ground after nearly two years away from management last month, Billy Davies has seen Forest’s fortunes change rapidly for the better. After Saturday evening’s impressive 1-0 win over Sheffield Wednesday at Hillsborough, Forest now lie in eight and a play-off push is most definitely back on. Polish midfielder Radoslaw Majewski netted on 27 minutes to notch up a crucial away win. Forest have now won their last three games and remain undefeated under Davies. Sheffield Wednesday on the other hand find themselves looking over their shoulders once again having recently moved away from the relegation zone after going on a five-game unbeaten run. After last week’s excellent victory over promotion chasing Crystal Palace, the Owls are in 20th position and just four points above relegation. With a seasoned campaigner like Dave Jones in charge, you’d back them to stay up, but certainly, the fans really expected more from this season.