Chelsea can become one of Europe’s greatest teams, declares Oscar 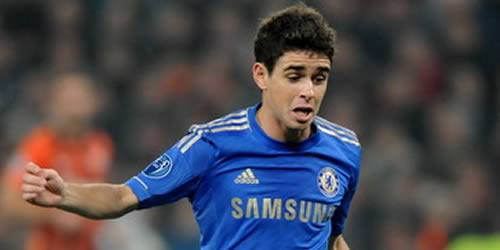 Oscar admits that Chelsea are in a period of “transition” but believes it will not be long until they are challenging for the top honours again.

The west Londoners saw their Champions League title defence ended at the first hurdle before Christmas and are currently 19 points behind Premier League leaders Manchester United.

But the 21-year-old, who moved to Stamford Bridge from Internacional last summer, is sure that Chelsea are on track to become one of the “greatest teams in Europe” again in time.

“It has been difficult this season because we have been in this period of ‘transition’,” Oscar told the Observer ahead of Chelsea’s FA Cup quarter-final trip to Manchester United.

“We’ve lost some important games, been knocked out of competitions we’d hoped to win, and the Champions League was the biggest one.

“But we’re a young team, a new team, with good players: Eden Hazard, David Luiz, Ryan Bertrand, Juan Mata… These are players who can help Chelsea become one of the greatest teams in Europe again.

“At the moment this is already a big club but, if we have three years playing together as a group, we will prove our quality. It’s a question of time. The more games we play together, the more we mature.

“In time, you’ll see that progress because we’ll be winning competitions. People have to have patience and we need to have time.”

Oscar has scored nine goals in 44 appearances for Chelsea so far this season, as well as making nine assists for his team-mates.

But the Brazil international believes there is still more to come from him as he continues to adapt to the Premier League.

“I have only been here eight months and am still early in the evolution process,” he added. “Within one or two years, I’ll have adapted to European football and that’s my aim: to grow as a player.

“I’m already better than I was when I arrived. Hopefully I can continue my own development and show my own quality.”