Chelsea transfers: Wilfried Bony says Blues are "a big and beautiful club" and reveals he is flattered to be linked with a move to London 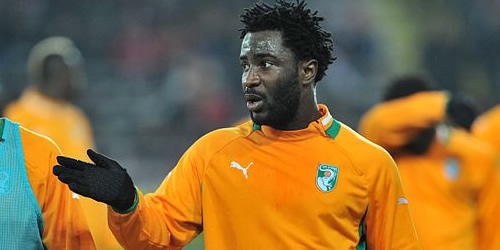 Wilfried Bony has declared that Chelsea are “a big and beautiful club” and says he is flattered to be linked with a summer transfer to Stamford Bridge.

The Ivory Coast striker has attracted the interest of a host of Premier League clubs, with Chelsea having reportedly sent scouts to watch him play for Vitesse Arnhem this season.

Bony, whose contract is set to expire in 2015, has netted an impressive 27 goals in 27 games in the Dutch league this term.

And 24-year-old is thrilled to be linked with a move to the Premier League and west London.

“It’s nice to hear that clubs are interested in me,” Bony told De Telegraaf. “Chelsea are a big and beautiful club.

“But this is not the right moment to think about a transfer. I want to focus on the remaining seven games of the season with Vitesse.”

Bony has made 18 appearances for Ivory Coast, scoring six goals.