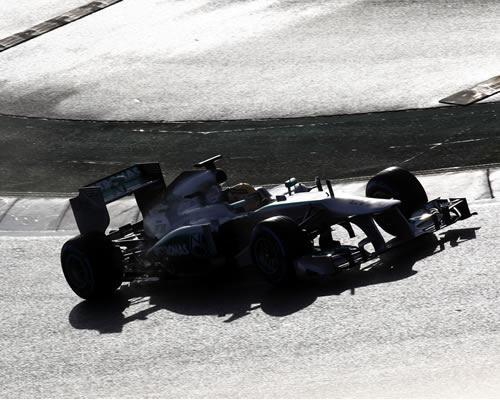 Lewis Hamilton admitted his delight at finally getting some dry track time under his belt as the Mercedes driver set an impressive pace on the penultimate day of pre-season testing in Barcelona.

Mercedes’ Hamilton clocked a one minute 20.558 seconds – the fastest time of the winter testing so far and 0.708 seconds clear of Ferrari’s Felipe Massa in second as the weather held out after a wet few days.

“It was great to have a dry track today for my final day of testing, and we were able to get through all the test items that we wanted to achieve by the end of my programme,” said Hamilton, who completed 117 laps on Saturday, equivalent to 545 kilometres.

“There’s still a lot of work ahead of us to get to where we want to be but the team is doing a great job. The guys are working so hard at the factory and here at the track; it’s been really nice to get to know everyone in the garage and how they work together over the past few weeks.

“The reliability, the mileage and the step-by-step improvements that we have achieved during the three tests are all very encouraging. Whilst we’ve been focusing on our own performance, we definitely haven’t seen the full potential of our competitors yet, so it’s difficult to predict where we might be.

“I’ll be back at the factory next week doing some final preparation work on the simulator and with my engineers, and then it’s off to Melbourne for the first race of the new season with my new team.”