With the season opener at Melbourne just days away, John McDougall takes a look at this year's F1 drivers' title contenders 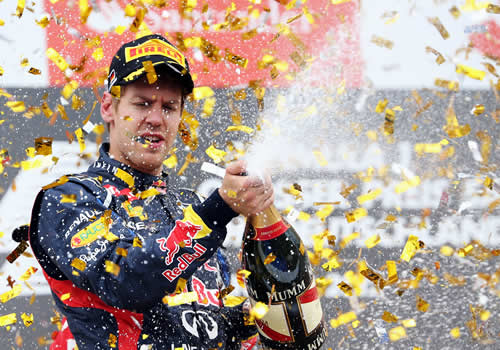 Formula 1 in 2012 was as competitive a season as ever, most memorably with seven different drivers winning the first seven races.

Sebastian Vettel did not experience the dominance he had in 2011, but won four of the last seven races to overhaul Fernando Alonso and claim his third successive world championship.

With the season opener at Melbourne just days away, here are the five main contenders for this season’s championship.

As a triple world champion at the age of just 25 – the youngest in the sport’s history – the German will go down as one of the all-time greats. Vettel will go into this season confident of retaining his crown, despite an intensely-competitive field containing four other world champions. With the RB9 – designed by inspirational engineer Adrian Newey – Vettel heads to Melbourne in good shape to win his fourth consecutive title.

Undoubtedly one of the – if not the – most talented drivers in the paddock, Alonso came within an inch of winning the championship in 2012. Given that was done with a car inferior to its main rivals, the Spaniard is Ferrari’s best chance of taking home the drivers’ championship for the first time since 2007. The Maranello-based team have worked hard to deliver a competitive car this season and Alonso will unquestionably be in the mix to win his third world championship.

With the departure of Lewis Hamilton to Mercedes, 33-year-old Button has assumed the senior role within the Woking-based outfit. He has admittedly had more of an influence on the development of the MP4-28 than in his previous three seasons with the team. In testing, the car looks improved compared to previous years, with team principal Martin Whitmarsh admitting the team will take risks in pursuit of victory. With experience, Button has matured into a solid all-round driver and will certainly aspire to add to the title he won with Brawn back in 2009.

The Finn’s return to Formula 1 last year after a two-year spell in rallying was undoubtedly a success. He won the Abu Dhabi Grand Prix and finished third in the drivers’ championship – and this season’s car looked very promising and consistent in testing. After driving like he had never been away, Raikkonen will feel more-than-capable of winning his second world championship and Lotus’ first since it’s re-branding from Renault last year.

Hamilton’s big-money move from McLaren to Mercedes – ending a 14-year association with the team – for this season has raised eyebrows. The big question is whether the Brackley-based team will be able to provide the 28-year-old with machinery good enough to challenge for wins and ultimately the title. Until the lights go out at Albert Park, the jury is still out, but Hamilton’s ability has never been in doubt. The team face a fight to get the car consistently to the front of the grid and challenge for wins, but anything is possible with a driver of Hamilton’s calibre.

Bahrain Grand Prix 2013: Why the race must go on despite safety fears