Indian Wells 2013: Roger Federer and Rafael Nadal will renew rivalries in the quarter-finals after battling through round four 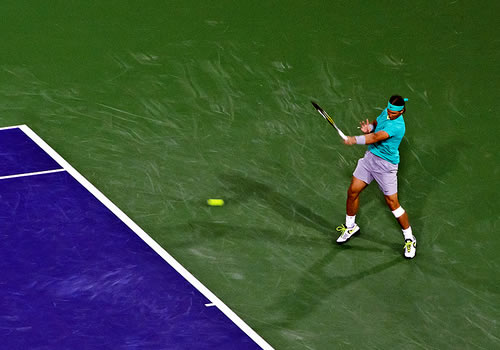 Wednesday dawned in the kind of near-perfect manner that the folk of Indian Wells must take for granted.

The sky was blue—almost the indigo of the courts that are scattered through the Tennis Garden in the desert. The sun shone, the wind barely ruffled the palm trees, and the purple backdrop of mountains was carved with traces of snow. But better than all that, the schedule brought together the best that men’s tennis has to offer.

All four current Grand Slam champions were present and correct: Novak Djokovic topped the upper half of the draw with Andy Murray bringing up the rear; Roger Federer held sway over the bottom half of the draw with Rafael Nadal—not perhaps the No4 seed but widely regarded as the other member of the top quartet—in charge of the opposing quarter.

They were ably backed up by the charismatic Frenchman, No8 seed Jo-Wilfried Tsonga, and the other Grand Slam winner in the company, No7 seed Juan Martin del Potro.

Completing the top-10 showcase were two very contrasting players up against one another, the powerhouse from the Czech Republic, No6 Tomas Berdych, and another flair player from France, No10 Richard Gasquet.

Add into the mix a former world No2 and one of the few men outside the top five to own a Masters title, Tommy Haas, and former-No6-current-No13 Gilles Simon.

It was all too much to shoehorn into the main arena, even one as big as the 16,000-capacity Indian Wells stage—for these eight top-flight matches were interleaved with the likes of Grand Slam champions Maria Sharapova and Petra Kvitova fighting for a place in their own final and a $1 million first prize.

So Tsonga against the fearsome 6ft 5in Canadian, Milos Raonic, already a winner in San Jose this season, led off on Stadium 2.

Tsonga was on the ropes in the first set, dropping serve after a heavy fall. Raonic took the opener, 6-4, and looked in control of the second set, too, until Tsonga made a sudden breakthrough to take it 7-5. In the third, it took just one fatal mistake from Raonic, a double fault at 30-40 in the 10th game, and the match was Tsonga’s, 6-4—though in the most bizarre conclusion of the day, neither man seemed to know the match was over.

Next came Berdych and Gasquet, and although Gasquet led the match-up 4-2, both were in fine 2013 form. Berdych arrived with back-to-back final finishes while Gasquet had two titles. What’s more, neither had dropped a set in Indian Wells. But the weight and power of the Czech was too much right from the off. Berdych returned with penetration and pace, and dropped only one point on his first serve. He flashed through the opener in under half an hour, 6-1, and broke in the first game of the second. And although his level dropped a little in the second as the Gasquet artistry broke through, the Czech looked the physically dominant man throughout, saved all but one of the break points thrown at him, and advanced, 7-5, to a quarter-final against another big man, the unseeded Kevin Anderson.

Then it was Murray—playing perhaps the least fancied contender left in the draw, the 30-year-old Carlos Berlocq who had never reached the fourth round of a Masters event before. This was the Briton’s third non-seeded opponent in a draw that had opened up very nicely.

But the ticket to have, on this 100-degree day, was on Centre Court. Few made it to their baked seats for the opener between Simon and Anderson, but it was packed out for the back-to-back matches featuring the two most popular and recognised men in tennis, Federer and Nadal—and both had to overcome big threats if they were to fulfil their destiny, a quarter-final face-off.

As a rule, Federer would be hot favourite to beat his countryman, the No18 ranked Stan Wawrinka…but there was the issue of his back. In the closing moments of his third-round win, Federer had tweaked the back that has troubled him through many years, and had been non-committal about just how serious it was. And although he had beaten Wawrinka in 12 of their 13 matches, in the last, in Shanghai last October, Wawrinka won the first set and forced a tie-break in the second. It was a close run thing.

Even so, the opening game was a shocker: four straight errors from Federer to concede a love break. He hit straight back to lead 40-0 on Wawrinka’s serve but had to await a fourth chance before he broke through.

Wawrinka then played a poor fourth game to hand Federer another break: It all looked a bit tentative on both sides. Wawrinka sprayed errors while the Federer backhand had no real penetration—perhaps a sign that he was avoiding too much twist and stretch on that wing. The Federer first serve was only reaching 50 percent, too, but the Wawrinka error count rose and the No2 seed went ahead, 6-3.

The slightly bizarre tennis continued, neither asserting any rhythm, errors flying, Federer’s backhand barely holding up. He broke to lead 3-1, but serving for the match, he could not make a first serve and was broken to love, and then went down 0-30 on his next serve but ultimately took it to a tie-break.

By now, Wawrinka was playing the stronger against a fragile-looking Federer, who conceded the set, 7-4, with a double fault.

Federer had five chances to break in the second game of the third, but could not, and was then broken himself after an irritable dispute with the umpire over a ‘hawkeye’ request. But this was the first sign of a real emotional engagement in the match by Federer, and sparked an aggressive run to break.

Still his serve wavered, but he survived a break point and things looked destined for another tie-break, until the Wawrinka of the first set reappeared to offer up an easy break and victory to Federer, 7-5.

Wawrinka won just a single point less than Federer, 111 to 112, and made just one less winner, 32 to 33. It was on the errors that he lost this 2hr 20min battle, 53 of them to Federer’s not insignificant 41. As Federer afterwards conceded: “Today I think I was a little lucky to come through it in the end.”

Next it was Nadal’s turn to reach that highly-anticipated quarter-final, what would be their first since Federer beat him in the semis at this very tournament last year.

A question-mark also floated over Nadal’s chances—for very similar reasons. This was his first hard-court tournament in almost 12 months—he pulled out of the tour with knee problems last summer—and he had played just one match before receiving a walkover in the second. So 12 of his 13 wins in 2013 were on clay.

To add to his problems, he faced one of the most talented players on the tour, the unseeded and unpredictable Ernests Gulbis. Until now, the Latvian had steadfastly failed to fulfil his potential. This year, a new regime had reaped a title amongst this 11-2 run, and the biggest rise in the rankings, a jump of 72 to No67.

He had already beaten two seeds, No9 Janko Tipsarevic and No20 Andreas Seppi, but this was Gulbis’s 14th match in 19 days for had come through qualifying to reach this stage. That he took the first set, 6-4, was perhaps not a surprise. Nor that Nadal hit straight back with a break at the start of the second. However, Gulbis levelled again in the fourth game, finding serves of over 130mph and making winners with his huge forehand.

Nadal, though, broke again and levelled with a 6-4 set. They remained locked together in the third as the clock reached two and a half hours in what was still the ‘day session’ despite it being 9.45pm. But at 5-5, Nadal attacked, got the break, and served out the match, 7-5.

They were separated by just two points, but it left Nadal just three matches short of his 600th match-win.

The nature of these two big matches, however, made the even bigger one ahead difficult to call. Neither Federer nor Nadal was at their best, as even Federer admitted: “I mean, we’re both a bit suspect going into our match, I guess, so it’s an interesting matchup. In the past, this match used to be a final, now it’s a quarter-final.”

In truth, whoever wins their 29th meeting will have to find more to cope with what lies beyond. Berdych continues to look hugely impressive against all-comers—and beat Federer only a fortnight ago in Dubai. And in the other half, where Djokovic faces Tsonga and Murray takes on Del Potro in the quarters, all four remaining men seem to be just warming up. Djokovic took just 87 minutes to despatch Sam Querrey, 6-0, 7-6, while Murray gritted out an uneven and tetchy match against Berlocq, 7-6, 6-4.

As for Del Potro, he dropped only three games in beating Haas, 6-1, 6-2, proclaiming afterwards: “I think it was my best match of the tournament, for sure. I played so solid on the baseline, trying to hit hard the ball with my forehand. I served well, and that’s what I need to play against Murray in the next round. Be aggressive all the time and find the lines with my forehands and serves.”

He and Berdych are the only remaining men to drop a set—and they could be the last men standing in Indian Wells, too.