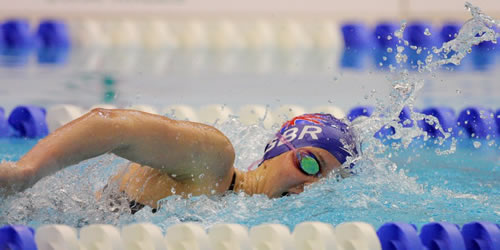 Jazmin Carlin saluted her training regime after she took over a second off her own Welsh record on the way to victory in the 800m freestyle on the first day of the inaugural British Gas International Swimming Meet in Leeds.

The 22-year-old, who failed to qualify for the London 2012 Olympics last year after being hampered by glandular fever and tonsillitis, clocked 8:24.42 minutes for a new Welsh record and fastest time in the world this year.

That was over seven seconds faster than Eleanor Faulkner in second place with Hannah Miley a further three adrift in third with Carlin admitting the win proved to her that with hard work does come rewards.

“I’ve been training really hard and it has paid off with a best swim,” said Carlin. “I’m a determined person and, although last year was disappointing for me, I knew there was more to come and I have been working hard.

“I’ve had my tonsils out which has been a big help as I’ve struggled with related illnesses in the past. I’ve been working really well with my coach Bud [McAllister] and I think we have got the best out of my training.”

Carlin was followed in setting a new record time by Siobhan-Marie O’Connor – the 17-year-old, who competed for Team GB at London 2012, breaking her English mark in the 200m medley.

The teenager led from start to finish to win in 2:10.53 – the second fastest time in the world this year – with Miley this time a second back for second while Sophie Allen was third in 2:13.33.

And O’Connor, who placed 21st in the 100m breaststroke and also formed part of the 4x100m medley relay team at London 2012, admitted her performance in Leeds has raised her spirits for the rest of the year.

“I’ve been training quite well and I’ve been to an altitude training camp. It was hard at first but I have really felt the benefits since I came back down,” said O’Connor. “It is good to produce such a good time so early in the season.

“It gives me a lot of confidence for the rest of the year. The good thing about the medley is that I get to train in all four strokes. Obviously I made the Olympics in the breaststroke but I want to keep my options open in terms of events for the future.”

Fran Halsall, who finished fifth in the 50m freestyle at London 2012, had to settle for third in a highly-competitive 100m freestyle final in Leeds that saw triple Olympic champion Ranomi Kromowidjojo claim the win.

Meanwhile Joe Roebuck didn’t quite set a national mark but he clocked a new personal best of 53.07 to win the 100m butterfly, recovering from being seventh at the turn to come home in first.

Six Nations 2013: Mako Vunipola to start for England against Italy

Squash 2020: Indian cricket and England rugby latest to back bid