London 2012 Olympics display launched at the Museum of London 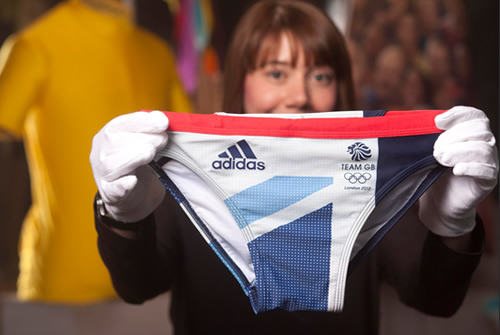 The Museum of London is reflecting on last year’s summer of sport in a free London 2012 display launched exactly 200 days after the Paralympic closing ceremony.

Opening the Olympics features a selection of approximately 70 objects, outfits and personal accounts from the Games to generate a fuller picture of the defining events and the city which hosted them.

This is the first time that many of the objects will have been on public display since the close of the Games, following the acquisition of various Olympic-related items from Locog and the British Olympic Association. The museum also led a concerted effort to collect material before, during and after the Games.

Sporting achievement is acknowledged with a range of competitor pieces on display, with recognisable items like Tom Daley’s 28” Union Jack swimming trunks alongside the yellow jersey which Bradley Wiggins wore in the opening ceremony.

These pieces join approximately 24,000 other items in the Museum of London’s dress and fashion collections dating from the Tudor period to the present day. An Olympic torch from the Olympic flame relay will also be displayed in the museum. 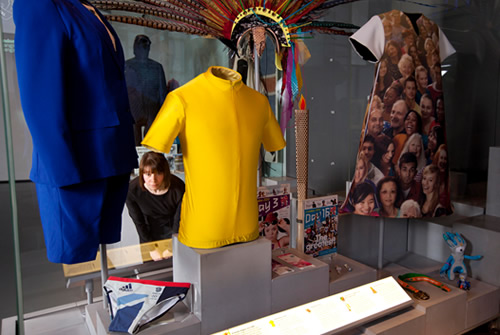 The free display will run until 31 October 2013 (Photo: Museum of London)

Timothy Long, curator of fashion and decorative arts, said: “The Museum of London is an active collector of objects of material culture, and there was no event which defined London more than last year’s Olympic Games.

“This display brings together a collection of objects and stories, allowing the public to re-engage with London 2012 and reflect on its legacy and success.”

The success of the Games was bolstered by the enthusiasm of volunteers and the general public, epitomised by the celebration and creativity of the Opening and Closing ceremonies. At the heart of Opening the Olympics will be a display of costumes and accessories from the ceremonies, in which 17,500 volunteers participated.

Highlights include a Mary Poppins outfit, an NHS nurse’s uniform, a dress from the 1960s scene, and a rush hour policeman’s newsprint suit. A particularly recognisable item is the dress worn by the country name bearer during the Olympic team procession – seen by millions on TV, and adorned with the faces of people who volunteered their help to make London 2012 such a success.

Alongside these costumes are the dramatic punk heads and a Mohawk headdress from the Paralympic Opening ceremony.

In forming a full picture of London 2012, the display also touches upon the ‘unofficial’ Olympic stories. Locally-organised protests and home-made homages sprang up across the city, and on display will be items which represent the local reaction to Olympic construction at Leyton Marsh.

By adding these items to the museum’s collections, it is hoped that future generations can enjoy the spirit of the Games and its legacy. Everyday items contribute to this, and so a quantity of souvenirs, tickets, badges, programmes and tweets join the display.

Opening the Olympics will take place in the Galleries of Modern London at the Museum of London. The free display will run until 31 October 2013.