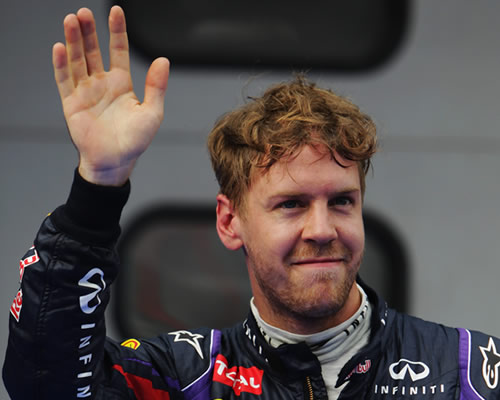 Sebastian Vettel’s gamble in qualifying for the Malaysian Grand Prix paid off as he took pole position for Sunday’s race, finishing a second ahead of nearest rival Felipe Massa.

But the surprise of Q1 was the uncompetitive Red Bulls, with Vettel dangling just above the knock-out zone on 15th and Webber saving himself at the end with ninth place.

And as the rain lashed down halfway through Q2 many drivers who had opted for the harder tyres found themselves scrambling back to the pits for a change.

The weather made casualties of Roman Grosjean and Paul Di Resta – the latter having a torrid time, forced off between turns seven and eight before spinning out on his final attempt.

With a break in the rain for Q3, everyone remaining opted for intermediates to tackle the damp track but still found the drive problematic as lock-ups became a common occurrence. 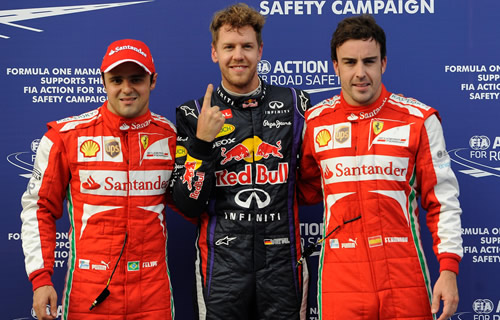 Top three: Sebastian Vettel will start ahead of Felipe Massa and Fernando Alonso at the Malaysian Grand Prix (Photo: Ferrari)

Having set the early pace for Q3 with a time of 1:52:876, Vettel ducked back into the pits for new intermediates, followed by Sutil and Kimi Raikkonen.

Hamilton sprung a surprise at the end of Q3, taking the provision lead, knocking roughly half a second off Vettel’s time, taking home an excellent 1:51.699.

However, Vettel’s pit gambit paid off, taking pole position off his final flying lap with a time of 1:49.674, sparking celebratory scenes in the Red Bull garage.

Sitting just behind the front row was Ferrari’s Fernando Alonso, who found himself in the unenviable position of being out-qualified by a team-mate for the first time in Malaysia since 2006.