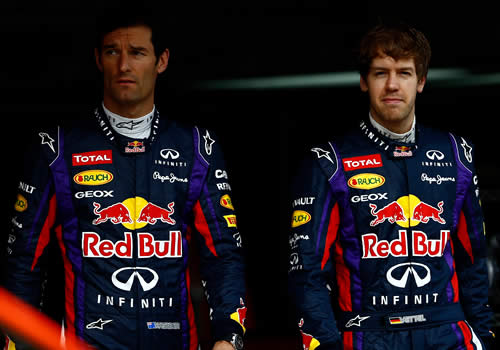 Vettel overtook his team-mate with 10 laps left despite orders to the contrary, as the German sealed his first win of 2013 and moved top of the drivers’ championship standings.

“I messed up today,” said Vettel.

“I would love to come up with a nice excuse as to why I did it, but I can’t.

“I can understand Mark’s frustration and the team not being happy with what I did today; I owe an explanation to him and the whole team. I will try to explain to them later.”

Three-time world champion Vettel added: “Mark and I are used to fighting each other when we’re close, but with the tyres how they are now, and not knowing how long they will last, it was an extremely big risk to ignore the call to stay second.”

Red Bull team principal Christian Horner said he was “frustrated” by proceedings after Vettel “took matters into his own hands” at Sepang.

“Obviously there’s an awful lot of debate about what happened at the end of the race,” said Horner.

“Our position after that finial pit stop was all about managing the race until the end and conserving our tyres, getting the cars to the finish and achieving maximum points.

“Unfortunately drivers’ interests can sometimes come into conflict with the teams’. Sebastian decided to take things into his own hands today and race Mark, thankfully making a clean pass and switching the order to the flag.

“It’s frustrating. Formula 1 is both a team and an individual sport and sometimes there is a conflict between a driver’s desire and a team’s interest. What happened today is something that shouldn’t have happened.

Will Greenwood: It’s an exciting time to be an England sevens player