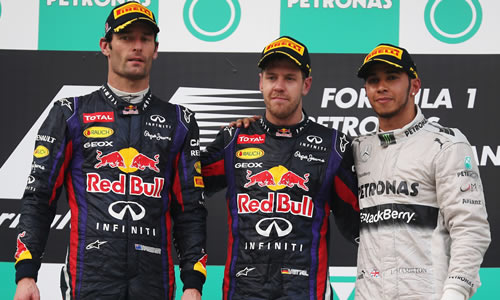 The defending world champion chalked up his 27th career victory and now leads the drivers’ championship after overtaking Webber 10 laps from the end.

With an uneasy feeling on the podium, the 25-year-old admitted he was not confident in his race strategy but was pleased with the close win.

“I want to say sorry to Mark. I took a lot of risk in passing him but I shouldn’t have done it,” he said.

“I wasn’t quite sure about the strategy but in the end it worked very well because we saved that extra set of tyres and gave that extra speed.

“It was very close wheel-to-wheel racing. It was a tight battle but I enjoyed the fight and had the upper hand in the end. Throughout the whole race it was very close.”

Mercedes’ Lewis Hamilton was briefly in second place but Vettel fought back to overtake first the Briton and then Webber.

The Australian accused his team of favouring his team-mate and could not hide his anger at finishing second.

“In the end, Seb made his own decisions and will have protection as usual,” Webber said.

“After the last stop, the team told me the race was over and we turned the engine down. I’m disappointed with the outcome of the race.

“The first part of the race went very well for us. In the end we got the right strategy. The team made a decision which we always say before the race.”

This was not the only inter-team duel as the Mercedes pair of Nico Rosberg and Hamilton tussled for the final place on the podium.

After coming out ahead, Hamilton felt his team-mate deserved to finish third but admitted his pride at being on the podium for the first time with his new team.

“If I’m honest, I really feel Nico should be standing here,” he said.

“He had better pace than me throughout the race but he’s a great team-mate and did a fantastic job.

“The team did a fantastic job. We brought it home and I’m proud to be up here for them. I’ve got to just keep looking forward.”

In the constructors’ championship, Red Bull have a 26-point lead over both Ferrari and Lotus, while the Silver Arrows are just three points behind them in fourth. The next race is the Chinese Grand Prix in three weeks’ time in Shanghai.