Malaysian Grand Prix 2013: Sebastian Vettel claims his first win of the new season as he leads a Red Bull one-two at Sepang 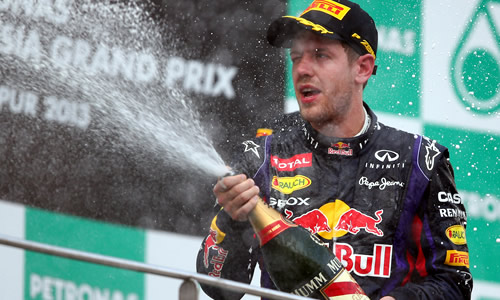 Sebastian Vettel is back on track for his fourth consecutive world title as he overcame his Red Bull team-mate Mark Webber in a pulsating Malaysian Grand Prix.

The German put his disappointing third-place in Melbourne behind him as he held Webber to second, while Lewis Hamilton finished third to pick up his first Mercedes podium.

Fernando Alonso’s race ended after just one lap as his front wing exploded down the home straight, caused by damage from nudging Vettel while rounding rain-drenched Turn Two.

Meanwhile, the Mercedes of Hamilton and Nico Rosberg thrived in the wet conditions – moving up to third and fourth behind Vettel and Felipe Massa.

On lap five teams began to change from intermediate to dry tyres, and when ex-McLaren driver Hamilton entered the pits, he mistakenly drove into his old team’s pit box.

It cost the Briton a few seconds but he was hunting down Red Bulls Webber – heading the pack after starting fifth – and three-time world champion Vettel.

Hamilton’s compatriot Jensen Button was clinging onto the coattails of both Mercedes in fifth, while the Brackley-based team were losing ground on the world champions.

All five front-runners stayed in position after the second wave of pit-stops midway through the race – but the gap was narrowing with Vettel hot on the heels of his Australian counterpart.

According to Vettel on the radio, Webber was ‘too slow’ – but as if spurred on by his team-mate’s words, the 36-year-old responded to keep the German at bay.

The third pit stops unfolded on lap 35 – Hamilton splitting the Red Bulls – while disaster struck for Button as his team failed to drill on his front-right tyre.

Vettel eventually ousted Hamilton, sparking a tantalising battle with Webber on lap 43 after the Australian pitted and was fed back onto the track mere inches ahead.

The pair toed and froed – nearly colliding on several occasions – but the world champion edged ahead and managed to hang on for his maiden victory of the season.

The next stop on the F1 calendar is the Chinese Grand Prix in three weeks’ time – a race in which Rosberg took the spoils in 2012.