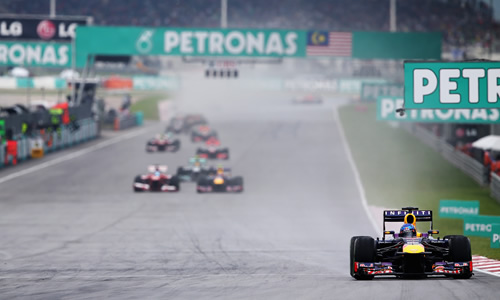 Mark Webber and Sebastian Vettel have had their run-ins in the past – that much is true. But when team principal Christian Horner and several race engineers scold the world champion for making some bold moves in the process of passing his team-mate, you can’t help but feel he doesn’t deserve to be treated like some insolent child. They are there to race – nigh-on 90 minutes of heart-pounding, wheel-to-wheel action. A lot of the time the cars don’t get close enough for a true tete-a-tete ding-dong, but when it does happen it is one of sport’s greatest sights. Vettel was perfectly entitled to battle for the win – even if the infant inside did rear its head when he moaned about Webber being ‘too slow’ on the radio. But Red Bull, if you want two world-class drivers on your books, then let them do their thing. It’s what you signed up for.

Whether the decision to keep Fernando Alonso out after his Turn Two bust-up came from the cockpit or the pit-lane is irrelevant – it cost the Spaniard precious championship points as his front-wing burst into confetti down the home straight on lap one. His pace was not pedestrian but nor was it blistering, so what sense was it to keep him out there and take such a gamble? And not even taking into account sporting reasons, you’d think a team which witnessed Felipe Massa nearly lose his life from debris in 2009 would be particularly attentive when it comes to the safety of both their drivers and the cars surrounding them. Now Ferrari head to China after failing to build on Alonso’s hard-fought second in Melbourne.

Mercedes may get used to the podium

Ross Brawn, how does it feel to be back at (somewhere near) the top? After three years of relative stagnation under the new Mercedes branding, the pair of Lewis Hamilton and Nico Rosberg are looking like Red Bull’s closest challengers. With the seeming demise of McLaren and Ferrari’s shoot-in-foot syndrome – while Lotus may prove too inconsistent – it is the perfect opportunity for an up-and-coming team to steal in. Mind you, they are still a way off the world champions’ sheer efficiency – but there is a platform to build on in the upcoming years. And when you’ve got two very good drivers, anything is possible. Somewhere in the Far East, Hamilton will be smiling to himself as those cynics over his ship-jumping fade into the ether.