Max Chilton: A Formula 1 pay driver or a sponsorship gold mine?

Max Chilton has made the leap to Formula 1 - but is the 21-year-old merely making up the grid or on a stepping-stone to success? 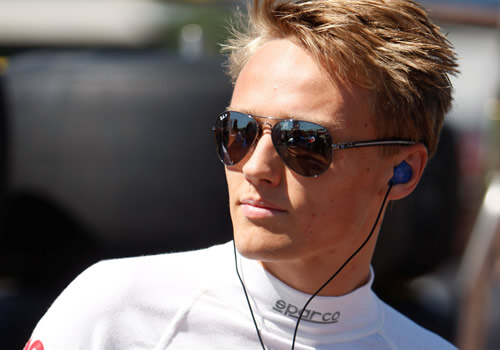 Max Chilton has made the leap to Formula 1 this season, joining Marussia as part of a growing number of ‘pay drivers’ in the sport – but is the rookie merely making up the grid and funding the Banbury-based constructor or is paying for the privilege of a debut season a stepping-stone to success?

It was no surprise to see Chilton – just 21 years old – making his first F1 start in Australia during the 2013 season opener. Born into a family of motoring enthusiasts, the youngster competed for Force India in the Young Driver Test in Abu Dhabi two years ago and spent last season as a Marussia reserve.

Chilton brings with him both motoring experience and wealthy backing – father Grahame is the proprietor of Carlin Motorsport, a UK-based motor racing team, boasting an impressive array of former employees such as Jenson Button, Nico Rosberg and three-time world champion Sebastian Vettel.

Crucially, Grahame is also the multi-millionaire chairman of insurance firm Aon Benfield and vice chairman of Aon Corporation, sparking criticism from some as to how Chilton found his way to a Marussia seat.

However, Chilton has not tried to dismiss the reality that has seen him start life at Marussia as a pay driver, watching potential team-mate Luiz Razia ejected for not meeting a £5m starting price, and claiming in a recent interview that sponsor money has helped provide drivers with race seats for decades.

And Marussia are not the only team on the grid who require driver-funded finances to progress, with rivals Caterham and Sauber also acknowledging their reliance on drivers who have splashed out for the privilege.

Even Williams and Force India have this season turned to drivers who bring with them a certain amount of financial backing and, in Australia’s season opening Grand Prix, almost 50 per cent of the 22-car grid had paid to be there.

What is a necessity for the relative newbies, relying on driver sponsorship to finance in Marussia’s case a £40m annual budget, comes at what many enthusiasts believe is a greater price – the absence of worthy drivers from the championship.

Marussia cited the global economic downturn and a lack of external sponsorship as the reason for releasing Timo Glock, while Heikki Kovalainen lost his Caterham seat to cash-backed rookies Charles Pic and Giedo Van der Garde.

What it does offer is young drivers from lower formulas, such as Chilton, the chance to step-up in the same fashion as multiple F1 world champions Michael Schumacher and Fernando Alonso – who also started their successful careers as pay drivers.

Understandably, Chilton has not troubled the scorers in his first two outings, but the improvement from Australia to Malaysia will be a confidence boost, finishing ahead of fellow Brits Paul di Resta and the unfortunate Button at Sepang.

Chilton may have financed his way to the grid, but he brings with him undoubted potential, not just as a driver, but as a marketing gold mine.

A winner at every level since he started racing at the age of 10, Chilton has dominated the podium in T Car, Formula Three and GP2 series.

Placing well for Marussia in Grand Prix’s this season is ultimately what will shape the 21-year-old’s future, but should the youngster impress, his ascent up the F1 ladder will not be harmed by a pretty-boy persona, which has already attracted the attention of some in the UK.

If his performance on the track can match up to his youthful good looks then there will surely be no shortage of top teams wanting to cash-in and draw on the potential sponsorship deals the Brit could command, in a similar fashion to compatriot Lewis Hamilton.

Mercedes new-boy Hamilton fired a parting shot at McLaren, claiming his new team are more interested in winning races than sponsorship deals, but sitting 25th in the Forbes’ Sports Personality Rich List and worth a reported £18m, the 28-year-old has the Woking-based constructor to thank for his personal fortune.

Successful, dating a Pussycat Doll, represented by Simon Fuller’s XIX Entertainment empire – whose clientele includes David Beckham and Andy Murray – Hamilton is one of F1’s most marketable drivers, but a deal with Reebok remains his only personal endorsement. A pay driver of sorts?

Admittedly, Chilton has a long way to go before he closes in on the proven ability of the former world champion, but nurtured correctly, the Marussia driver could provide a commercial windfall for a constructor willing to speculate.

Cash-backed racers may dominate the grid this year and Chilton may have paid for the privilege of a Marussia seat, but it may just be a matter of productive seasons before the Brit – and his future team – are cashing-in on lucrative sponsorship deals. Effectively, Chilton could remain a pay driver his whole career.

England coach Andy Flower admits there is room for improvement