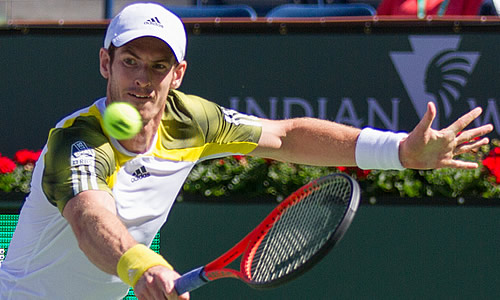 It’s been a given in tennis for as long as Richard Gasquet has played the game that he was a man of huge talent. Take the year he turned 20: three titles and a second Masters final.

It’s been a given that the Frenchman’s backhand—a magnificent weapon struck by a single right arm—is one of the sport’s finest, a thing of beauty and power.

And by the time he was 3-0 up against Andy Murray in the semi-finals of the Sony Tennis Open in Miami, it was also a given that Gasquet was in his finest form for many a season. He scored 13 points to Murray’s three in those opening minutes and had made more gasp-inducing backhand winners than most players could manage in an entire match.

It was worth remembering that Gasquet, newly back in the top-10 having reached a career-high No7 seven years ago, was one of the few men with multiple titles this year, and was second only to David Ferrer in match-wins.

It was also worth remembering that, while Murray may have held a slight advantage in their previous meetings, 4-3, Gasquet had won both hard-court meetings and all three of their best-of-three-set meetings. And in all but one of their matches, Gasquet had taken the first set.

But though the Briton’s followers may have feared the same here, Murray quickly took back control from the attacking Frenchman with his own down-the-line passing shots, broke, and levelled at 3-3. By the time he held serve in the seventh game, he was also level on points courtesy of an athletic diving volley winner. And with his first-serve percentage up to 75 percent, he began to look in control of most of the rallies.

Sure enough, he made more space, made fewer errors and forced the hand—even the backhand—of Gasquet. He broke to love in the ninth and looked on a roll against a distracted Frenchman until a loose game, closed with a double fault, handed the break back. They headed to a tie-break.

There are few men who can stand toe-to-toe with Murray through long baseline rallies, but Gasquet did just that, out-playing Murray several times with corner-to-corner backhands and then picking off angled shots at the net to take a 4-1 lead. A couple more moments of brilliance from the French racket—both at the net—took him to 6-3 and Murray hit a backhand wide. As so often before, Gasquet had the first set, 7-6 (3).

Gasquet, playing the kind of attacking tennis that launched his career a decade ago, pushed Murray to deuce on the Briton’s serve, but it was Murray who broke in the next game, helped by Gasquet missing two smashes in the difficult Miami lights.

The Frenchman, who began to look depleted in this physical and fast-paced tussle, increasingly struggled to live with Murray’s speed and fitness. The Briton broke again and served out, 6-1.

Gasquet now needed treatment to his feet, a worrying development in such an energy-sapping match. Murray made it all the worse, moving him all around the court and well beyond its boundaries. He broke straight away, though in an unexpected lapse, made two double faults to hand the break back.

The packed arena became a bubbling cauldron of excitement during these topsy-turvy, exhilarating opening games. But Murray broke again, and there was a growing sense that his strength and stamina would be the deciding factor. He led, 3-1, and with another break, it was 5-2. Serving out the match, he turned his extraordinary defence into outrageous attack for a love hold and a 6-2 victory.

It had taken two hours of fine tennis, full of flair, skill and athleticism from both players, to decide the outcome, but Murray—the stronger, fitter man—produced his best tennis of the week to seal his second straight final in Miami.

Just one man, David Ferrer, remains between him, a second Miami title and the No2 ranking. In 12 meetings, there has been little between them—indeed they split their last four matches—but Murray has won all their outdoor hard court contests. And now Gasquet has tuned him up nicely for another.

As for the Frenchman, the only way must surely be up if he continues to play with such conviction and energy for the rest of the season. The statistic that leapt off the page after this semi-final was his boldness at the net: He won 18 points from 34 attempts.

It harked back to his early success on the tour, when he beat the then No1 Roger Federer in Monte Carlo with the same attacking tennis. Perhaps, at last, the Gasquet of old is back—and that, much as the similar attacking tennis of Tommy Haas just hours before—is something to celebrate.