Miami Masters 2013: Andy Murray beats Marin Cilic 6-4 6-3 to book his place in the semi-finals and keep his bid for world No2 on track 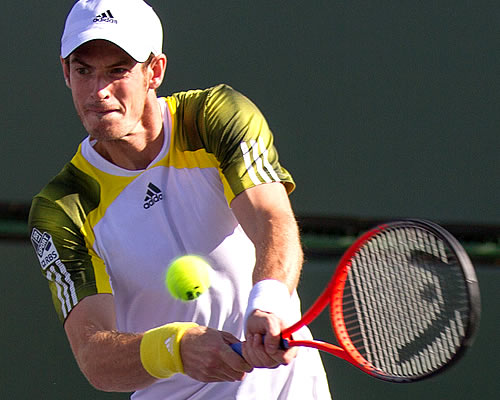 When Andy Murray embarked on his Miami campaign, the form books and history suggested his path would funnel down to a repeat of the 2012 final: the Briton against the world No1, Novak Djokovic.

With the absence of Roger Federer and Rafael Nadal in the draw, that scenario looked even more of a certainty, as did the loss of Djokovic’s potential semi-final opponent Juan Martin del Potro in his first match, followed by the defeat of the highest seed in Murray’s quarter, Jo-Wilfried Tsonga, in the fourth round.

Murray dismissed the young pretenders—Bernard Tomic and Grigor Dimitrov— in the early rounds, gradually building up his form but barely, it seemed, needing to find his best.

Coming into his quarter-final against the No9 seed Marin Cilic, Murray had still to drop a set. He looked and sounded confident—perhaps not surprising, for if he is going to feel comfortable anywhere, it is in Miami, his training base when not in the UK.

Then the draw took an unexpected turn with the loss of Djokovic in the fourth round to Tommy Haas. At the stroke of a German racket, Murray became the highest remaining seed and the hot favourite for the title. And with the title he would also overtake Federer to become No2 in the world.

Murray had still more reason to be confident: He brought to the match a 7-1 head-to-head against Cilic, the Croat’s only win coming at the US Open in 2009. And compared with Murray’s eight Masters titles from 30 quarter-finals, this was only Cilic’s sixth Masters quarter, and he had yet to progress further.

There were shades of the US Open in the opening couple of games—last year’s quarter-final, that is, when Cilic began aggressively to take the first set, pushed Murray to a second set tie-break, before losing in four. Here, he fended off four break points in the opening game with three straight forehand errors, but held and then broke Murray to lead 2-0.

But in truth, both men took time to settle into any consistent rhythm, and there were three more breaks of serve before Murray held to draw level 3-3. Now the standard crept up as they tested one another with wide baseline rallies, but Murray returned better, and his finer touch drew another Cilic error and break chance. This time the Briton seized it, and served out the set, 6-4.

Cilic, for all his ability, has neither the variety of Murray nor a single point-winning shot. For such a tall man, for example, he does not serve like John Isner nor pound a forehand like del Potro. Easy to understand, then, why the Croat has struggled to beat top-five players—he has failed to do in more than three years.

Cilic suffered a brief lapse to get broken to love in the opening game of the second set. Murray, in contrast, held to love for a 2-0 lead. It was time for Cilic to try something else, and to his credit, he threw himself into attacking the net at every opportunity.

It looked as though it would bring a deserved reward in the fourth game, a 15-minute marathon of seven deuces in which Murray faced four break points. Cilic used his wide, angled backhand to great effect, opening up the court to ghost in for a volley put-away.

The tactic worked several times, but just as often Murray ran down balls that looked like winners to gasps from the crowd, and skimmed a return to the feet of the Croat. It was brilliant and cruel—an exhilarating game that Cilic had to win if he was to halt the British momentum, but he could not. He went 1-3 down, and his head went down too, but he quickly roused himself again.

The level from both men was now high, long rallies taking them wide, testing their net skills and defence. Murray broke to lead 5-2 and still Cilic stayed bold and offensive, his wide backhand return and overhead finish beating Murray enough times to get one break back.

It took one more intense and fascinating game to close out the match. For nine minutes, Cilic struggled to find a first serve but held off six match points with courageous ventures to the net. However his forehands could not penetrate this slow court and Murray punished him from the baseline time and again. Sure enough, Murray broke to take set and match, 6-3.

Cilic’s bold play gave him more winners than Murray, 25 to 18, and he played a remarkable 34 points at the net, but his movement, touch and above all his defensive skills were never a match for Murray’s.

The Briton would have to wait a few hours to discover his semi-final opponent—the very contrasting packages of the big-hitting man from the Czech Republic, Tomas Berdych, or the flair of Frenchman Richard Gasquet, and both have posed him problems in the past. He stands at 4-4 with Berdych—though Murray won the last two—and 4-3 over Gasquet—though they split their last two matches.

With his tennis now nicely tuned-up by a Cilic match that, despite the straightforward scoreline—tested every element of Murray’s game, his position as favourite for the title should remain secure.