Miami Masters 2013: World No5 David Ferrer comes from a set down to beat Tommy Haas and reach the final 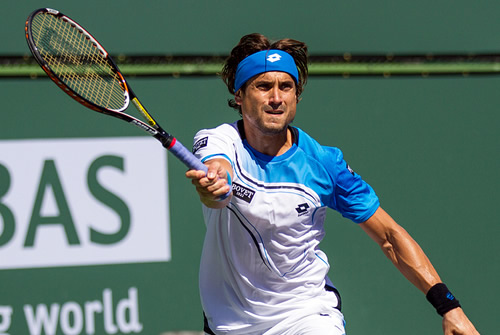 David Ferrer came from a set down to beat Tommy Haas on Friday Photo: Mirsasha/Flickr

A week ago, it all looked so easy.

The Miami draw was made, the quarters were divided, and favourites for the semi-finals picked.

Some choices were easy, some less so. David Ferrer was the unfortunate who got the in-form No5 Juan Martin del Potro in his section. Richard Gasquet, should he survive a run of fellow single-handed backhands in Mikhail Youzhny and Nicolas Almagro, then faced a big-hitting, big-serving man: Milos Raonic or Sam Querrey or, most likely, Tomas Berdych. It was a tough draw but he—like Ferrer—paid back his selection and made it to the final four

Andy Murray—yes there were some young guns to put in their places, but he had dominated both of his likely quarter-final opponents, Marin Cilic and Jo-Wilfried Tsonga. He was a shoo-in.

But the easiest pick for the semis was defending champion Novak Djokovic. The highest seeds in his quarter were fellow Serb Janko Tipsarevic or No11 Gilles Simon. Neither ought to trouble him—but then, of course, neither did. Djokovic did not get far enough to play them. For in his path, after two unseeded men, came Tommy Haas. Sure, the German had beaten Djokovic in the past on grass, sure he was the Comeback Player of 2012, sure he had enjoyed a couple of good runs in 250 tournaments this season, but…

But so well was Haas playing, having risen from 169 a year ago to inside the top 20, that he and Ferrer became the headline act for an early Miami feature.

And that is where trouble began. Haas and Ferrer, spearheading a phalanx of 30-somethings, also stood out in the quarters—demanding more headlines—and now, here they were, facing one another across the net in the semis. Within the space of a week, they had already filled more column inches than they should. What more was left to be said?

It was far from easy already: For this particular correspondent, both players have always drawn admiration by the bucket-load. Take one fortnight last autumn—Haas demanding recognition for reaching his 500th match win and Ferrer lifting the spirits with his first Masters title.

Perhaps, though, there was one thing left to consider: the pursuit of a second career Masters title.

It seemed remarkable that a pair of men in the 30s—who by chance both celebrate birthdays this week—had a combined professional career of almost 30 years, had together notched up more than 1,500 matches and 33 titles, and had enjoyed career-high rankings of No2 and No4, but had just one Masters title apiece.

So who would begrudge either their shot at such a prize at this stage of their careers? Who, too, would deny Haas a shot at a top-10 ranking for the first time in six years, or Ferrer a chance to again overtake his nemesis, Rafael Nadal, in the rankings, and a shot at one of the few titles Nadal has never won?

At the start, then, it was the German who made it all look so easy, just as he had against three back-to-back seeds: He lost no more than six games against Alexandr Dolgopolov, Djokovic or Simon.

Ferrer faced deuce in the opening game, and again in his second, but Haas had him off balance. If Ferrer took the initiative at the net, he was passed on either wing. If he stayed back, Haas sliced wide to draw a defensive return and raced to the net himself. The German outplayed him on the baseline, too, with spin, angle, and depth. It rattled Ferrer, the errors piled up and he went 0-40 down. Haas, with a sweep of his single-handed backhand, broke at the first attempt.

Haas did the same in the seventh game, converting his fifth break point to lead 5-2. Ferrer by now had an uncharacteristic 16 errors, but he hustled and bustled, took on a few second serves, and pulled one break back. But the German, after his brief lapse, made no mistake at the second attempt and served out the set, 6-4.

Already, though, Ferrer had reduced his errors, and that stood him in good stead in the second set. He started strongly opening the court with some penetrating forehands while Haas struggled to find his first serve—now down at 31 percent. The pressure produce some shanked Haas forehands, a few openings for the Spaniard and, after a love hold in the fifth, Ferrer broke for a 4-2 lead.

He broke again, courtesy of a nervous double fault and a shanked forehand from Haas, to level the match, 6-2. Haas’s errors, 19 of them, now mirrored almost exactly Ferrer’s in the first set.

It was time for the purple Haas shirt that he had donned for the concluding sets of his previous matches, and at first it worked its magic. He looked revitalized, his backhand hit home and he broke in the opening game. But could his serving level follow?

He had to battle hard, saving a first break point with a lob onto the baseline, but after almost eight minutes, Ferrer fired a forehand winner to break back. Then it was Ferrer’s turn to waver: Haas broke and took a 3-1 lead with a strong serve-and-volley game.

But the momentum swung again. Ferrer broke to edge ahead on points, 81-76, as the clock approached two hours. Both tension and weariness seemed to grip Haas and a double fault on break point gave Ferrer one final advantage: He served out to love, 6-3.

The Spaniard looked uncertain whether to laugh or cry: It had been Ferrer at his gutsy, never-give-up best. And he may now hope it is Richard Gasquet he faces for one final push to the title rather than Andy Murray—for while he has a decent record against the Briton, he has dominated the Frenchman.

But the final awaits another day and will bring another chance to praise the Ferrer dogged spirit. For now, it was still time to acknowledge the retro, all-court, offensive tennis of comeback king Haas. Ferrer out-ran him in the end, but this week’s converts to the German’s style can surely look forward to more of the same—though next time he will be ranked No14 and 35 years of age.