Miami Premier 2013: Serena Williams comes from a set down to beat Maria Sharapova 4-6 6-3 6-0 and win a record sixth title 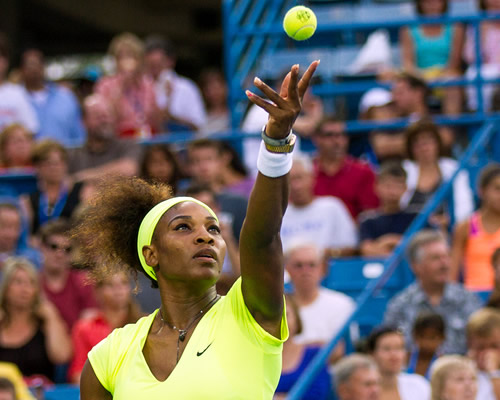 And so, just as the seedings predicted it should, the final of one of the biggest tournaments in the women’s tennis calendar came down to the best. World No1 Serena Williams would take on world No2—herself a former No1—Maria Sharapova.

Two of the most recognised and enduring women in their sport, they jointly own 19 Grand Slam singles titles, four WTA championship titles and 75 more trophies besides.

They have together won well over a 1,000 matches in a combined 30 years on the pro tour, both hitting the heights as teenagers: Williams won her first Major at the US Open in 1999 and Sharapova won hers at Wimbledon in 2004.

Through the tournament for which both women have a particular affection, Sharapova had dropped not a set, part of an 11-match, 22-set winning streak, and she aimed to become just the third player ever to pull off the Indian Wells-Miami double.

Williams, for her part, aimed for a record sixth Miami title, having already blasted 40 winners past defending champion Agnieszka Radwanska to break the record for most match wins in the tournament’s history.

There was, then, a rightness to this match, not least because, since 2002, there had been just one final that has not featured either Williams or Sharapova—though their fortunes had been rather different. Williams lost just one final in 2009, Sharapova lost all four finals, including last year. And the record books did not augur well for the Russian, either. Her only wins against Williams came as she burst to the top in 2004. Since then, the American had won 10 consecutive matches, dropping just 21 games in the last five.

The richest female athlete in the world, though, looked determined to change all that. Sharapova, perhaps the only woman in tennis who can pound a forehand as hard as Williams, hit hard and deep to batter the American through a 15-minute third game. It took seven deuces and the defence of three break points for Williams to hold, but in the fifth, Williams came under pressure again.

Sharapova returned serve so fast and deep at Williams’ feet that she could not handle the pace, faced another break point and this time Sharapova took it—though she did not lead for long.

Williams struck back, as both women cracked their forehands with extraordinary power. The intensity of every shot, every glance down the court, every fist pump was palpable, and the crowd roared their approval in equal measure.

By 4-4, Williams had struck 15 winners to Sharapova’s five but her first serve was proving inconsistent, which exposed her to the Russian’s first-strike tennis. A double fault conceded another vital break point, and Sharapova forced the error to take the game. She held to love and, despite trailing Williams in winners, 5-14, she had won the first set in five years from her dominant rival, 6-4.

No doubt Sharapova did not feel complacent. Certainly her intensity and work-rate did not drop, but Williams—who had found herself a set down to Dominika Cibulkova in the fourth round, too—dug out the Serena of her previous matches against Sharapova, cut down the errors, focused on her accuracy, and refused to be bullied by Sharapova’s roar and firepower. She bottled up her very obvious nerves and broke to love in the second game.

But it was a very tense third game, full of errors, that conceded the break back, and in the fifth, now serving into the sun, Williams seemed to flounder again: Sharapova produced two outstanding returns of serve—one on the forehand, the next on the backhand—to break again. Now it was ‘make or break’ time, and it was a magnificent Williams who reclaimed her focus with an almost zen-like calm, to break not just in the sixth game but in the eighth as well. She served out the set, 6-3, airing a first 120mph delivery to boot.

The question was whether Sharapova could find enough, and consistently, to counter the Serena surge, and she certainly gave it her all. But Williams took advantage of the sun to jump on the Sharapova serve, hustling inside the baseline and forcing an error on break point.

The stadium was abuzz: They admire Sharapova here, but they loved the mighty American who lives just down the coast, as close to a home hero as they could get. Even a foot-fault on serve—which triggered her infamous default in the semis of the 2009 US Open—did not ruffle the Williams visage. She held, broke twice more, and led 5-0.

Only now did her pent-up emotion burst forth—a roared fist-pump before calmly walking to her chair to prepare for the final assault. She would serve into the sun for the match, and one double fault, followed by a netted forehand, set the crowd on edge. It proved, though, to be Sharapova’s last glimpse of a point: Williams served out her sixth final victory in Miami with a resounding 6-0.

Williams said during week, “I don’t believe in luck. I believe in hard work.” Unfortunately for all the rest, Williams does not just have a great work ethic but as deep a desire to win as anyone in tennis.

And as other women attain ever-higher levels of fitness and power, Williams strives to improve, too, despite being the oldest women’s No1 in the Open era. Her emotions are more under control than ever, it seems, leaving her able to channel her intensity into her shots rather than into the ether.

The others may gain more leverage against her in the coming months—clay is not Williams’ favourite surface, and she then has huge points to defend from Wimbledon through to the end of the season. But she remains, as she has been for many years, the one to beat—and at the top of her game and the rankings.

Miami Masters 2013: Murray heads to No2 after epic Ferrer victory