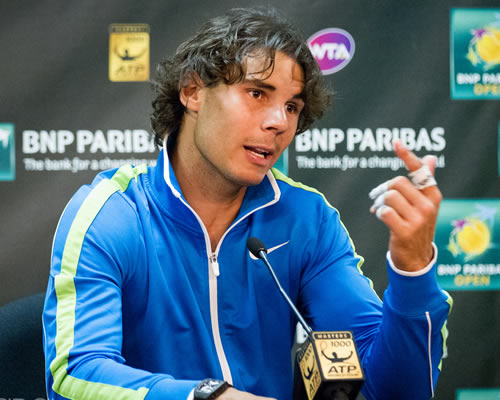 Rafael Nadal is currently ranked No5 in the world Photo: Mirsasha/Flickr

Rafael Nadal has admitted his delight at reaching his third straight final since returning to action as he prepares to take on David Ferrer at the Mexican Open on Sunday.

The 11-times Grand Slam champion overcame Nicolas Almagro 7-5 6-4 to book his place in the final, on the back of winning the Brazil Open last week and after being runner-up at the Chile Open before that.

Nadal said: “It’s a very, very happy moment for me to be in another final, three in a row now since coming back. It’s something I couldn’t think of before the start of the season because I really didn’t feel very well with my knee.”

Nadal’s 2012 season was brought to a premature end at Wimbledon, when he suffered a shock second-round loss to Lukas Rosol at SW19 before missing the rest of the year due to tendinitis in his knee.

The world No5 missed the Australian Open in January but appears on course to feature at his first Grand Slam since last summer as he looks to defend his French Open crown.

And the Spaniard said he has been thrilled by the progress he has been making since making his return to competitive action.

“This week has been very emotional for me,” he added. “I’m starting to feel freedom to run for almost every ball, so that’s the best possible news for me and I’m enjoying the tennis.”