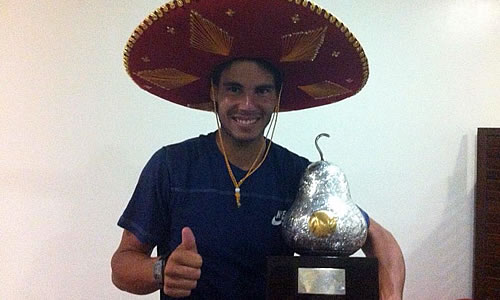 Rafael Nadal posted this picture on Facebook after his win Photo: Rafael Nadal/Facebook

Rafael Nadal could not hide his delight after thrashing David Ferrer to win the Mexican Open title, before confirming that he plans to play at Indian Wells next week.

The world No5 stormed to a 6-0 6-2 win over defending champion Ferrer in Acapulco as he continued his return to full fitness following his knee troubles.

Nadal missed the second half of last season as well as January’s Australian Open due to tendinitis in his left knee.

But the Spaniard looks to be finding his top form again after brutally disposing of Ferrer in 65 minutes to win his second title of the year following his triumph in Brazil last month.

“For me, I played almost perfectly,” Nadal, 26, said afterwards. “I would have never imagined playing at the level that I played today. I’m leaving happy and surprised.”

“I’ve had some difficult months, especially during my time away from tennis, but I feel good.

“I have to thank my family and everyone involved in my rehabilitation. It has been a difficult time over the last few months.”

“My knee responded well all week. My heart tells me I should continue competing, that I need to move on to the next tournament.”

The BNP Paribas Open at Indian Wells gets under way on Thursday.