Squash 2020: Indian cricket and England rugby latest to back bid 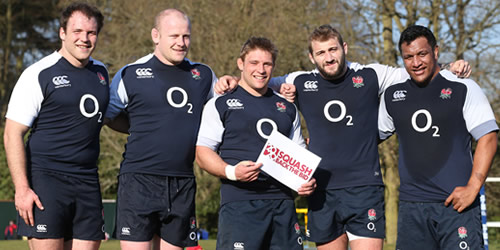 England's rugby squad are the latest to back Squash's 2020 bid Photo: Squash2020

If the diversity and quality of a sport’s supporters are any measure of success, then squash looks well on the way to fulfilling the dream of its worldwide army of players and fans.

For while the Squash 2020 campaign to join the Olympic family has been growing apace—most recently with the launch of its Twitter and website drives—it has been the names of those willing to ‘stand up and be counted’ that have made the headlines.

At the World Series Finals in London in January, Olympians Victoria Pendleton and Greg Searle not only came to watch but heaped praise on the athleticism and visual spectacle of squash.

In February in Rotterdam, squash superstar Nicol David shared the stage with Roger Federer, himself a player and an enthusiast for the sport, who was more than happy to say “I back squash: Do you?”

Next came some of the biggest names in Indian cricket. Sachin Tendulkar, Virender Sehwag and Harbhajan Singh who, before their first Test against Australia, posted photos on Twitter holding banners that also pronounced: “I back squash, would you?”

Now, with the England rugby team in full flow in the Six Nations contest, members of its squad have joined the chorus. As they head into their latest clash with Italy, England captain Chris Robshaw, along with Chris Ashton, Dan Cole, Henry Thomas, Tom Youngs, Joe Marler and Mako Vunipola, have also backed the Squash 2020 campaign.

World Squash Federation (WSF) CEO Andrew Shelley said: “It’s great to have the support of members of the England Rugby team, particularly given Rugby Sevens’ success in gaining a place in the Olympic Games at Rio in 2016.

“We are entering a crucial few months in our campaign to join the Olympic Games Sports Programme and building online support and awareness is an important part of our campaign strategy.”

Shelley was referring not just to the decisive date in September when the International Olympic Committee (IOC) decides in Buenos Aires on which of the competing sports will be admitted in 2020. There is an earlier, and perhaps more vital, meeting in St Petersburg at the end of May when the competing bids will put their final cases for inclusion.

Until now, the other sports up for consideration were softball/baseball, karate, sport climbing, wakeboarding, wushu and rollersports, but the unexpected cutting, last month, of wrestling from 2020’s core sports threw one of the oldest Olympic sports into the same melting pot.

So squash still has a major hurdle to leap in May—it is currently unclear how many sports will be allowed to stay in the race until September—and although it is fast becoming the one to beat, its campaign for recognition will accelerate.

The latest ambitious challenge, taken on by former internationals Peter Nicol and Tim Garner, is the Seven Continent Challenge. The strap-line says it all: 40,000 miles, 7 days, 2 players, 1 try.

The two players will travel more than 40,000 miles and spend over 70 hours on planes over the course of a week in a test of mental and physical endurance. Starting on 13 April, they will play a match a day in the Falklands—Antarctica, Santiago—South America, Sydney—Australia, Kuala Lumpur—Asia, Cairo—Africa, London—Europe, and New York—North America. And as they publicise squash’s Olympic bid, they will also raise funds for squash charities: the LV= SOS Kit Aid Scheme and the Natasha’s Steps Trust.

Nicol and Garner, then, are not just taking one further step, but seven further steps, on the road to what many hope will be 2020 success. And with fellow athletes from squash, tennis, cricket, cycling, rowing and now rugby backing them all the way to 2020, this may finally be squash’s time.

Find out more about how squash has reinvented itself, keep tabs on its 2020 campaign—including video clips—on the Back the Bid website, and follow the latest news on Twitter.