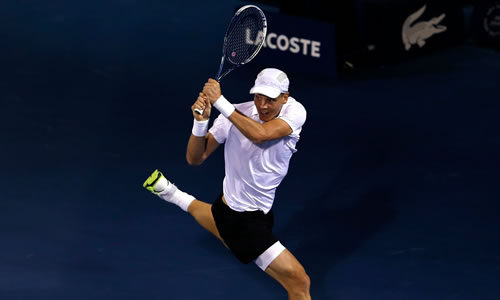 For the first time in its history, the Dubai Duty Free Tennis Championship boasted the top four seeds in the semi-finals – and what a foursome they were.

The two top ranked players in the world, Novak Djokovic and Roger Federer, took on respectively Nos six and seven, Juan Martin del Potro and Tomas Berdych, and each one of them had cruised through the quarters in around an hour, none of them conceding more than six games. In short, they were all finding their form and, to add a bit of spice, the lesser seeds had scored significant wins over their opponents last summer.

Nevertheless, the hopes and expectations of most were for a Djokovic-Federer final. Del Potro may have beaten Djokovic for the bronze medal at the 2012 Olympics, but he went on to lose on the outdoor hard courts of Cincinnati and New York before conceding a one-set lead at the World Tour Finals. And he was on the wrong end of a 7-2 head to head.

Berdych had more cause for optimism against Federer, and not only because he scored a famous victory over the Swiss in the quarters of the US Open—as he had done in the quarters of Wimbledon two years before. He had beaten him four times in their last seven matches, notably twice on more outdoor hard courts.

It was a telling record which Federer acknowledged ahead of the match: “I’ve struggled somewhat against him, but very often its because his game is so big that he just has a big say in the outcome of the match.”

The first of the semis, between Djokovic and Del Potro, went pretty much by the form book, the Serb asserting himself early. He held his opening serve with the help of two aces, pressed Del Potro in the second and broke in the sixth before holding to love for a 5-2 lead. Del Potro, who has been suffering from a sore wrist during the week, looked reluctant to fully open up, and certainly didn’t come to the net as often as when he won the Rotterdam title. Djokovic, giving up only five points on serve, took the set, 6-3.

Down a set, though, Del Potro began to hit harder—it was all or nothing—and he broke with a perfect lob over the net-rushing Djokovic. The Serb pegged back the 0-3 deficit, stepping aggressively inside the baseline while Del Potro seemed pinned behind it. Down 30-40, and after a long thriller of a rally, the Argentine was given a time violation warning, argued at length with the umpire and suffered the consequence: a loss of concentration. Djokovic broke and then broke again to serve for the set.

There was one final twist—begun with the rally of the match, if not the tournament. It saw both men lob perfectly, and retrieve with a hot-dog into play. Del Potro produced two stunning full-blooded returns of serve to break back and they went to an unexpected tie-break. But despite a couple more court-burning forehands from Del Potro, Djokovic took control and advanced to the final, 7-6(7-4).

The Serb’s mental strength these days is as fearsome as his physical strength:

“I was very pleased with the performance overall and the way I handled myself in the tough moments. Mentally I stayed tough and believed that I could go all the way and win in straight sets. I didn’t really allow myself to be negative.”

Del Potro was gracious in defeat, but highlighted his loss of concentration in the second set: “He deserved to win.

“He played so well in the tiebreak. I was a break up in the second set, and I made mistakes. I lost the calm when I start to discuss with the umpire, and he come back so quick.”

It takes Djokovic to a 27-3 lifetime in Dubai, to his fourth final here, and to 17 straight match-wins going back to last year, which he closed by winning the World Tour Finals in London.

Despite his pre-match comments, Federer did not seem to struggle against the big power-hitter from the Czech Republic. He burst out of the blocks with an attacking serve-and-volley game—more than in his previous matches in Dubai—and it reaped rewards despite a couple of early misses. It was, though, his backhand that helped score the required first-set break, two of them whipped past the net-bound Berdych, and a forehand winner made the break in the eighth to leave the Swiss to serve out the opener, 6-3.

In the second set, Federer was the first with a break chance but could not convert, and with his first serve level dropping to under 50 percent, he lost the edge and Berdych broke in the sixth and held to love for a 5-2 lead.

The momentum swung again when Federer broke as Berdych served for the set and then held to love. The Swiss almost broke again, stepping inside the court to pounce on the Berdych serve, and making one remarkable running backhand winner down the line for the first of three break points. He would rue that lost opportunity, but not as much as the ones that followed in the tie-break.

The Swiss opened up a 6-4 lead, but Berdych saved the match points with some big serving. Federer’s third match point came and went at 8-7 before Berdych took the set with a forehand winner off a Federer second serve.

Federer played a poor game in the fifth of the final set—a double fault, a forehand wide and another long to give away the break, while the Berdych serve began to look impregnable. Federer almost went 2-5 down but saved three break points, and then another in the ninth, but he was fending off the inevitable, and Berdych served out the match to love, 6-4.

Federer and Berdych are the only two players in the top 10 without a title in 2013, but whereas Berdych has now reached two finals back-to-back, Federer has not yet made it past the semis, and has conceded two titles—and the points that go with them—in the process: Rotterdam and now Dubai.

It would go some way to explaining his downcast demeanour afterwards: “It’s just disappointing, because the match was on my racket, and you do all the right things for so long and then at the end, you gotta explain why you didn’t hit two shots decent, you know?

“It’s just disappointing losing this way. I think it’s the third time I’ve lost to Tomas with match points, two singles, once in doubles, so its one of those matches, you just feel you should have won and you end up losing.”

Berdych, not surprisingly, was thrilled: “I couldn’t be better feeling than this one, coming from court playing Roger I would say almost in front of his home crowd, and to be the one who won that match. It really feels great. I’m very pleased the way I played today.”

He will, though, have to find another level if he is to overcome Djokovic. He has just one win against the Serb in 13 previous matches, and none in the last 10.