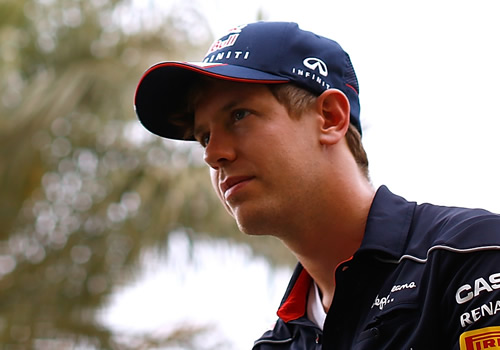 Sebastian Vettel expects Ferrari to continue their “very strong” start to the season at the Bahrain Grand Prix this weekend.

Fernando Alonso claimed his first win of 2013 when he cruised to victory at the Chinese Grand Prix last week to leave the Spaniard just nine points behind championship leader Vettel after three races.

And Red Bull’s triple world champion is expecting the Italian outfit to continue with their impressive start to the season at this Sunday’s race.

“Certainly they’re doing a good job,” Vettel said. “If you take those three races – in Malaysia they had only one car in the race – but it was pretty clear already in Australia that they seem to work well with the tyres and therefore have a very strong pace on Sunday.

“So I don’t expect any difference here; I expect them to be very strong again, but obviously we are not looking too much at others.

“First of all we try to look after ourselves and I think there is a couple of things we can do better working with the tyres – trying to get more range and more pace out of them – and then we go from there.”

Meanwhile, the chairman of the circuit which will host this weekend’s race has played down safety fears surrounding the event by insisting it is “absolutely safe”.

The Grand Prix two years ago was postponed and then cancelled after month-long pro-democracy protests were crushed and at least 35 people died.

But last year’s race went ahead, and Zayed Al Zayani said: “Is it safe? Absolutely. They have always been safe here and I think this year won’t be any different.

“The F1 race has received appreciation from everyone in Bahrain including the opposition parties who say they support the race this year and last year.

“I think it is a unified position, and something where the nation is behind it and represents a cross-section of the Bahrain community.”

He added: “We conducted a survey and it turned out 77 per cent of the people wanted the race in Bahrain and 90 per cent believed it contributed positively to the economy.”