Bahrain Grand Prix 2013: Mercedes' Nico Rosberg grabs his second-ever pole-position - and then admits his surprise at the feat 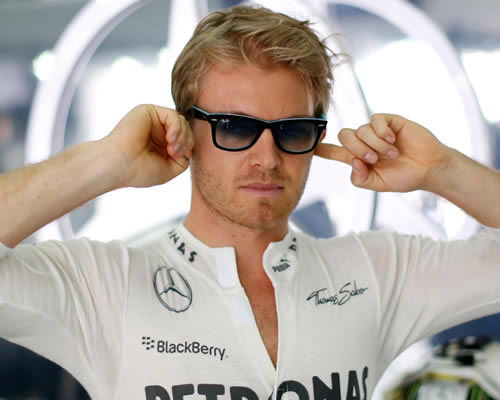 Mercedes’ Nico Rosberg believes the Bahrain Grand Prix will be tough on the tyres after securing only the second-ever pole-position of his career.

The German was strong throughout qualifying and grabbed his first top-four finish to give himself the best possible chance of winning the controversial race.

And Rosberg was left thrilled at his performance, especially after an unspectacular practice on Friday.

“I was a little bit surprised at the pole,” he said.

“It wasn’t clear before who was the quickest car especially over one lap – I was a bit closer this morning already so I was a bit happier than yesterday.

“I think as a team we worked really well during the night to improve the car because yesterday we were really struggling so that’s been going well and I’m really, really happy.

“It’s a fantastic result, great for tomorrow but of course tomorrow is going to be a tough race for sure with rear tire degradation especially.”

Rosberg posted a hugely impressive 1:32.330 to take to the front of the grid ahead of multiple world champions Sebastian Vettel and Fernando Alonso, who finished second and third.

Such was the quality of his drive that even Vettel thought his compatriot was too much to handle on the Sakhir circuit but believes tyre strategy will be crucial tomorrow.

“When I got told the gap to Nico, it was clear that even with a perfect lap he was unbeatable today,” said the reigning world champion.

“But nevertheless I’m very happy – we managed to save some tyres throughout qualifying and as Nico touched on it will be all about tyre degredation tomorrow on again.

“We’ll see what happens but it’s still good to be starting from the front.”

Rosberg’s team-mate Lewis Hamiton will start from ninth place after incurring a five-place penalty for changing his gearbox after a tyre failure before qualifying.