Bahrain Grand Prix 2013: Sebastian Vettel wins his second race of the year ahead of Lotus' Kimi Raikkonen and Romain Grosjean 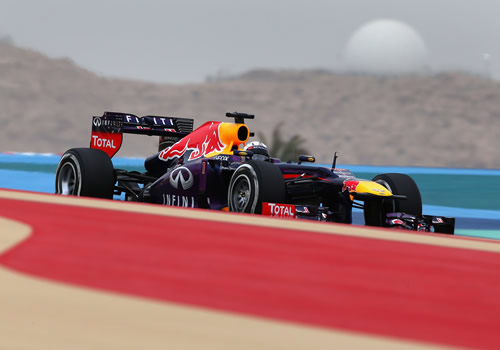 Sebastian Vettel put in an imperious drive to win the Bahrain Grand Prix and extend his lead in the drivers’ world championship.

Rosberg could only hold off Vettel’s advances for two more laps though, the Red Bull taking the lead before Fernando Alonso’s Ferrari overtook the Mercedes too on lap four.

But Alonso’s race soured on lap eight after his DRS flap stayed open and the Ferrari mechanics had to force it shut, leaving him in the midfield.

Vettel – on a new set of hard tyres – overtook Raikkonen’s Lotus on lap 15 after the first set of pit-stops around the first corner to retake the lead.

An inter-team battle ensued on lap 27 between McLaren duo Jenson Button and Sergio Perez, the Mexican coming out on top to go sixth.

A lap before, Di Resta went down the inside of Grosjean to go second as the Scotsman put in a composed drive.

But Di Resta was powerless to hold off Raikkonen who used DRS to pass the Force India on lap 34 to go second.

Ferrari’s miserable weekend continued on lap 37 after Felipe Massa was forced to pit with a right-rear tyre puncture.

Vettel pitted on lap 42 for a final fresh set of hard tyres and came back out with a comfortable lead over Raikkonen as the race entered its final stages.

The first European race of the season is next on the Formula 1 calendar in three weeks time in Spain at the Circuit de Catalunya.