Bahrain Grand Prix 2013: What lessons did we learn as Sebastian Vettel clinched his second win of the year at Sakhir? 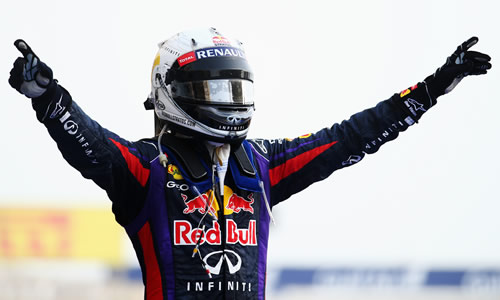 After the podium in Bahrain was exactly the same as the one we saw in 2012, it wasn’t the only bit of deja-vu. Sebastian Vettel – who started second – overtook his compatriot Nico Rosberg on the third lap and simply did not look back. He is the only driver to have led every single race on the 2013 calendar at some point and his performance in Bahrain was an adequate illustration of why. The three-time world champion got his strategy spot-on and was comfortable all the way through the 57-lap race. It was as composed a drive the German has ever put in, bringing back memories of the 2011 season where his dominance was unrivalled, Vettel himself calling it a “seamless” drive. On this evidence, a fourth world championship is certainly within his reach.

McLaren duel is what we want to see

Though the focus of this race will be on Vettel’s impressive win, a bit further down the grid there was some enthralling racing. Not least this was between McLaren team-mates Jenson Button and Sergio Perez. Team principal Martin Whitmarsh’s heart rate may well have increased three-fold, but the battling was what we as race fans want to see. Button and Perez were fighting tooth and nail for a solid points place, the Mexican eventually coming out on top and finishing sixth, four places ahead of his team-mate. Some of Perez’ driving bordered on slightly dangerous at times – damaging his wing on Button’s rear tyre – but it is precisely why Formula 1 fans all over the world tune in to the sport.

Weekend to forget for Ferrari after mechanical problems

After Fernando Alonso put in a commanding victory the last time out in China, Ferrari will want to get to the Circuit de Catalunya as swiftly as possible. With grid penalties for others, Alonso and Felipe Massa started third and fourth respectively and had the opportunity to score some solid points. But Formula 1 can be cruel at times and Bahrain was a classic example of things going wrong very quickly. Alonso’s DRS flap stayed open on lap eight and had to go into the pits twice to have it closed manually. The Spaniard was robbed of this overtaking aid for the rest of the race meaning he had to settle for eighth place. Brazilian driver Massa meanwhile suffered two punctured rear tyres 19 laps apart from each other, ruining his chances of a points finish. In such a competitive field, a return of four points over a race weekend for a team as quick as Ferrari is not good enough. It will be a long three weeks at Maranello while the team waits for lights out in Barcelona.