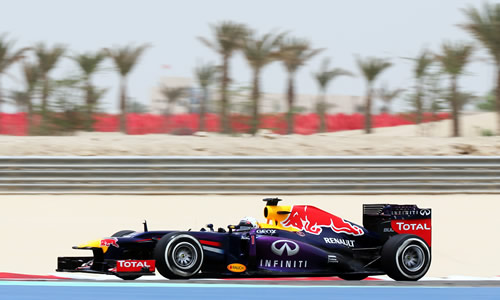 Sebastian Vettel took a huge step towards a fourth world championship with victory at the Bahrain Grand Prix – and then thanked his lucky boots and praised Red Bull’s incredible pace.

The German showed off his boots to the crowd on the podium, before thanking the Red Bull team for a faultless race.

“They’re not top secret, I just don’t get my legs so high as I’m not a woman,” joked Vettel. “I’ve had them for a long time and they seem to work, they’re actually for my grandmother.”

“It was a fantastic race and a big, big thank you to the team, a faultless, seamless race from start to finish.”

Vettel took the race to Nico Rosberg early on and the Mercedes driver, who finished ninth, could not hold off his compatriot’s advances.

“I knew it was crucial to get into the lead from the start if I could,” added Vettel.

“Then look after the tyres and the pace was incredible, the race was quick, we took care of the tyres so overall I’m very happy.

“It was a very straight forward race and we didn’t expect the incredible pace we had, in the end it was quite a controlled race.

“We managed the gaps and we had enough tyres to push towards the end and we’re probably in a good position regarding the championship now.”

The three-time world champion also praised Renault, who were the engine provider for all three on the podium, and Vettel felt the French-based company deserved full credit.

“I would like to congratulate Renault,” he explained. “It’s the same order as last year, but with all three guys on Renault engines.

“The guys back in France are working very, very hard and sometimes get criticised for not having the strongest engines, but ‘Merci Bea Coup’ – well done to them.”

Second-placed Raikkonen was disappointed with the start his Lotus made, but was delighted to progress after a successful pit-stop.

“I didn’t have a strong first or second lap,” he explained. “But after the first stop I was able to come back stronger so we had a good race in the end.”

And teammate Grosjean was delighted to see himself on the podium after a poor first three races.

“In the first three races we were consistent but not where we wanted to be,” he said. “We have done a lot of work on the car and basically today we got it right.”