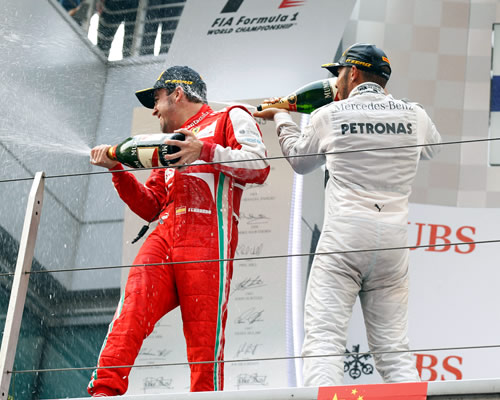 Ferrari’s Fernando Alonso is optimistic about his title chances after his excellent drive took victory at the Chinese Grand Prix.

The Spaniard was in imperious form, fighting off Lotus’ Kimi Raikkonen and Mercedes’ Lewis Hamilton and a late challenge from Red Bull’s Sebastian Vettel.

And the double-world champion was full of praise for his team, whose race plan saw Alonso remaining in a dominant position throughout the race.

“Definitely it was a fantastic race for us from the start to the end,” said Alonso.

“We had no problems with the car, the tyre degradation was better than expected.

“It feels fantastic – after the retirement in Malaysia we were under pressure to finish but of the two races we have finished we have been second and first, so it is looking good and we are very optimistic.”

The 31-year-old started third on the grid – using the easily-worn ‘soft’ tire, he passed second-placed Raikonnen at the start before overtaking race leader Hamliton on lap five.

Switching to durable ‘medium’ tyres on the seventh lap, he dropped back into the pack before passing then-leader Jenson Button before a tyre-change on lap 21 put him in third place.

However, it became clear that Alonso had played a masterful strategy – with everyone else needing another stop, he took control of the race and opened up a 13-second lead.

And after his final stop on 41 laps, the Spaniard rejoined the race right behind Vettel – who still needed another stop – and passed him with only 13 laps remaining.

All that was remaining was for Alonso to cross the finish line, taking himself up to third place in the drivers’ standings – nine points behind leader Vettel, who finished in fourth.