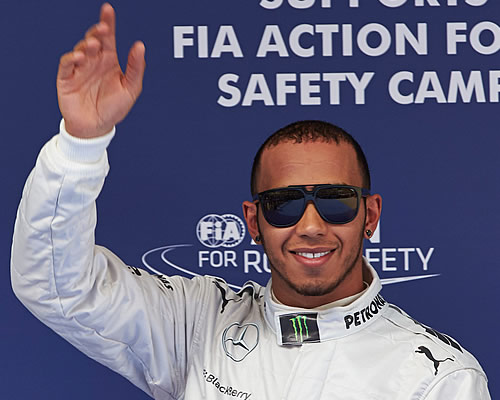 Lewis Hamilton was “ecstatic”’ to seize pole position for the Chinese Grand Prix – his first ever as a Mercedes driver.

Hamilton, despite a third career pole in China, is only the second British driver to collect a pole for Mercedes following Sterling Moss in 1985.

The former world champion praised his new team for their start to the weekend, but insists they need to maintain position come the race.

“It’s an incredible feeling I’m so happy to have our first pole for some time and I’m just ecstatic,” he said.

“The lap was great, the team has performed really well all weekend so far and I really hope we can carry that into the race.

“We had 10 minutes but we left it until three minutes to go and then you have to get the perfect out lap to get yourself up there and I really can’t complain about it.

“I think we have good race pace, so I’m expecting a really tough race but I hope we can maintain position.”

Mercedes chief Ross Brawn was full of praise for Hamilton’s performance and believes the Brit is beginning to show his potential speed with his new team.

“I’m delighted and it always takes a little bit of time to settle into a team,” explained Brawn. “But I’ve seen this weekend that Lewis is beginning to gel with his engineers.

“I think have seen the result of that today – it’s still an upward slope, but hopefully it hasn’t stopped.”

Elsewhere, Mark Webber’s weekend is again clouded in controversy as the Australian finished Q2 parked at a hairpin having run out of fuel.

The Red Bull driver believes a lack of fuel pressure was to blame, but faces the prospect of getting demoted to the back of the grid.

“Qualifying was over before it started really,” said the Australian. “We’ll have to see what the rules are, go through the process and take it from there.

“It could be a double-whammy. After all that hard work the guys do, this is such an important part of the weekend to get right and it slips through the net.

“It’s disappointing as I think Q1 went very well for me, I felt good in the car, I felt good all weekend but we didn’t get the right part the weekend correct.”

Marussia’s Max Chilton went out in Q1 placing 20th, one behind teammate Jules Bianchi, but the 21-year-old was pleasantly surprised following a problematic lap.

“You have to take the positives out of it,” he said. “I was pretty happy with my first lap, but had a few problems on my pushing lap which I need to work on.

“Then we had a problem and didn’t get back out again, but to my amazement we are still ahead of the Caterhams.”